Star Wars Forces of Destiny are a Micro-series of original, animated shorts will focus on untold stories of everyday heroism that shape the destinies of Rey, Jyn Erso, Sabine Wren, Princess Leia, Ahsoka Tano and others.

Next week, a series of animated Star Wars shorts is going to start hitting the Disney YouTube channel before launching on the Disney Channel shortly thereafter. The new shorts will be released under the title ‘Star Wars: Forces of Destiny’ and will focus on some of the women that make Star Wars great. The new stories will be canon, but will also be tales that we have yet to hear about Rey, Jyn Erso, Sabine Wren, Princess Leia, and Ahsoka Tano.

In a major coup, Disney was able to get the original talent (where available) to reprise their roles for the animated shorts. Daisy Ridley will be voicing Rey, Felicity Jones will be back for Jyn Erso, Rebels actress Tiya Sicar will continue voicing Sabine Wren, Ashley Eckstein will be on hand for Ahsoka Tano, Lupita Nyong’o will help bring Maz Kanata back to life, and Matt Lanter will be back to reprise his role as the animated voice of Anakin Skywalker from The Clone Wars.

Along with the new series, Disney and Hasbro are releasing a new set of dolls for Princess Leia, Ahsoka Tano, Jyn, and Rey. 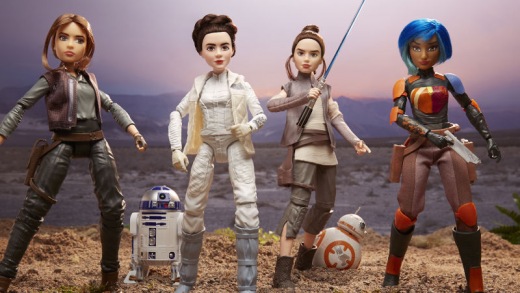