Mark Hamill just dropped a hint on Twitter that will have you setting a reminder to watch Monday Night Football on October 9th.

Star Wars fans are split. Half the people want as many trailers as they can get their hands on and the other half have gone into media lock down, lest they spoil important aspects of the film for themselves. For those in the former category, Mark Hamill just dropped a hint on Twitter that will have you setting a reminder to watch Monday Night Football on October 9th.

In response a fan tweet suggesting that today would be a good day to drop a new Star Wars: The Last Jedi trailer for no particular reason, Hamill responded with:

Watch Monday Night Football on Monday October 9th- for no reason in particular.

This would make a lot of sense as the next trailer date for a couple of reasons:

– They did this same exact thing with The Force Awakens (that one was on October 18th).
– Network football ratings are sinking fast and this would give them a massive boost.

The great thing about this is that it almost assuredly means that it will coincide with the release of ticket sales, just like they did with The Force Awakens. So, you are warned. If you want to get one of those prized first showings, you’d better be ready with whatever app or website you use to buy tickets. If it’s anything like it was last time, websites couldn’t handle the traffic and there ended up being a lot of really frustrated people. 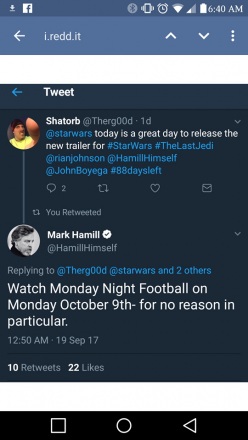