When Benicio Del Toro was first announced as an addition to the cast of Star Wars: The Last Jedi, I was really hoping that he would be playing an older version of Ezra Bridger from Star Wars Rebels. Those hopes were quickly dashed when we found out that he would be playing a hacker of questionable motives named DJ. Information and images of the character have been sparse, but we have a little bit of both, thanks to a new article from Empireonline.

In an interview with Empire, Del Toro had this to say about DJ:
“This character could come straight out of a Bob Dylan or Tom Waites song, or even a Dostoyevsky novel. He’s like something out of Dickens; there have been characters like him in all kinds of literature. He’s like a knife: if you grab him by the blade, he’ll cut you. If you grab him by the handle, he can be very, very useful.”

While I’m not really sure that actually tells us what we wanted to know about the character, we can at least breathe easy knowing that all answers will be revealed in just 14 days! 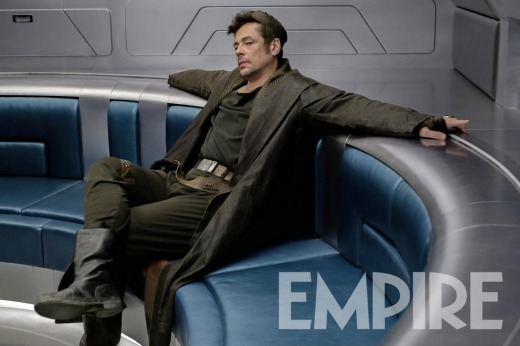