‘Star Wars: The Last Jedi’ The Porgs and Caretakers of Ahch-To

Looking straight out of Jim Henson’s The Dark Crystal, the Caretakers appear to be one part bird, one part fish, and one part nun.

When we last say Luke Skywalker and Rey at the end of Star Wars: The Force Awakens, itlooked like they might have been the only two living things on Ahch-To. As we now know, that’s just not the case, along with the adorable porgs, there are also the mysterious Caretakers. As part of their coverage on Star Wars: the Last Jedi, EW looked into the inhabitants of the island that will play into the upcoming film.

The Porgs:
These puffin like creatures are mostly practical effects puppets created by Neal Scanlan, but Rian Johnson says that the inspiration for them comes from the actual puffins that inhabit Skellig Michael, the island that is being used for the Ahch- To set.

“If you go to Skellig at the right time of year, it’s just covered in puffins, and they’re the most adorable things in the world,” Johnson tells EW. “So when I was first scouting there, I saw these guys, and I was like, oh, these are part of the island. And so the Porgs are in that realm.”

In a new photo that was released with the article, it’s looking like Chewbacca may have found himself a new little buddy to help him through the passing of his pal, Han Solo. 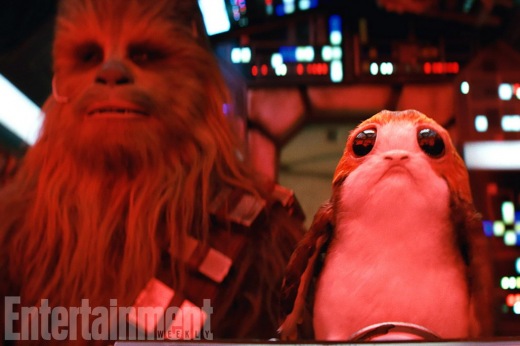 The Caretakers
Looking straight out of Jim Henson’s The Dark Crystal, the Caretakers appear to be one part bird, one part fish, and one part nun. the speak an alien language that sounds like a cross between a fish and a Scottish Person, and they’ve been on Ahch- To for thousands of years, maintaining the structures of what could possibly be the very first Jedi Temple. As Johnson describes, they do interact with Luke, and they tolerate his presence on the island, but they aren’t exactly thrilled to have him there. 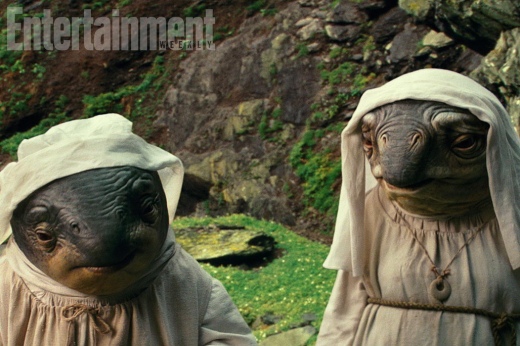