We’d pretty much written this movie off for dead, but the fates have prevailed and it will see the light of day only 10 months late.

Back in 2011, we interviewed the star of USA’s “Fairly Legal”, Sarah Shahi about her show and what it took for her to win a role in the Walter Hill directed, Sylvester Stallone film ‘Bullet To The head’. We are pretty sure that was the only interview that day that made her so excited that she swore on camera.

We are guessing that she also did a fair amount of swearing when the movie was pulled from it’s release date. There was no reason given, but the rumor mill put out that the film was not what everyone was hoping and that there were problems salvaging it in the editing room. Now it looks like that might not be the case because it was just announced that the film will be getting its day with a February 1, 2013 release.

As far as the rumors, here is what Walter Hill had to say:
““I’m currently finishing up and locking reels on the movie—as to the content and style of the film, Sly and I are in perfect sync.”

In the movie, Stallone is a New Orleans hitman who teams up with a New York City cop (Sung Kang) to “bring down the killers of their respective partners.” The film also features Adewale Akinnuoye-Agbaje, Jason Momoa, and Sarah Shahi. 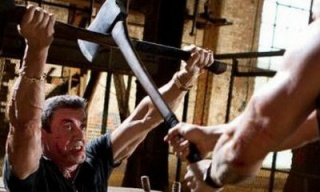