New Info Plus Teaser Trailer Description For ‘Transformers: The Dark of the Moon’

Michael Bay held a private screening for a few selected media outlets yesterday to show off the upcoming 3D teaser trailer for “Transformers: The Dark of the Moon.” 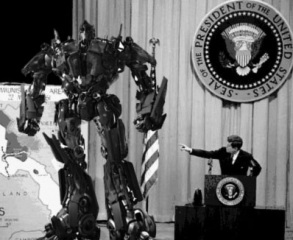 Director Michael Bay held a private screening for a few selected media outlets yesterday to show off the upcoming 3D teaser trailer for “Transformers: The Dark of the Moon” in addition to 20 minutes of very rough footage. Below we have some trailer descriptions and some tidbits from IGN who was fortunate enough to attend the private screening held in Plantinum Dunes’ Santa Monica office:

For the first minute or so of the TF3 trailer, you might think you’re watching a period space race drama along the lines of Apollo 13. The trailer recreates Apollo 11’s historic moon landing on July 20, 1969, intercutting between archival footage of news anchor Walter Cronkite and a dramatization of what was going on behind the scenes at NASA that day.

Cronkite then ominously tells his viewers they’ve lost the feed from Apollo 11. Back at NASA, the ground control crew inform astronauts Neil Armstrong and Buzz Aldrin they can now undertake their real reason for getting to the moon before the Russians: a giant alien spacecraft has crashed on the dark of the moon. And what they find inside it … will be revealed when you see the trailer online or in theaters this weekend (it will be attached to The Chronicles of Narnia: The Voyage of the Dawn Treader).

“Transformers 3” will boasts a number of locations around the world, however a great deal of the movie takes place in Chicago.

One thing that IGN noticed immediately from the footage was the tone of the movie, “a far darker, hostile and scarier film than its critically savaged predecessor.” Moreover, it goes on record saying that “Bay vows that in the third film, death is final and the Decepticons mean effin’ business. And no dorky humor.”

Fan can expect more action sequences and without spoiling much, “the homestretch of the film sees Sam Witwicky (Shia LaBeouf) venturing into the devastated Windy City on a rescue mission alongside Epps (Tyrese Gibson) and a small team of handpicked men. The Decepticons have utterly devastated Chicago. Bay sees this portion of the film, with its small band of desperate protagonists up against overwhelming enemy odds, as being along the lines of Black Hawk Down.”

IGN also reveals that “one of the action highlights of the movie will most certainly be Josh Duhamel’s Lennox and his squad using wingsuits to fly through the canyon of downtown Chicago buildings, a sequence rendered largely practically using the best wingsuit flyers in the world.”

The action is “much more hands-on here, grimy and nasty like real combat would be. Another standout bit was when Optimus Prime went Oldboy on a few Decepticons.”

Lastly, according to IGN Bay seems extremely apologetic with “Revenge of the Fallen” and “repeatedly said that this film is meant to set things right with the franchise.”