The C.S. Lewis Company has entered into an agreement with The Mark Gordon Company to jointly develop and produce THE CHRONICLES OF NARNIA: THE SILVER CHAIR.

I really enjoyed The Lion, The Witch, and The Wardrobe when it first came out, but I honestly never got around to seeing either of the sequels. Neither did a lot of other people which is why everyone thought the franchise was pretty much dead after 2010’s Voyage of the Dawn Treader.

Now, Mark Gordon, has popped in and partnered up with CS Lewis’ family to announce that the series will continue with a movie based off the next book in the series, The Silver Chair. 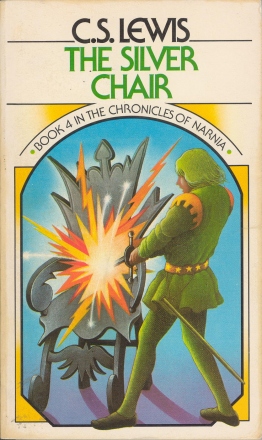 THE CHRONICLES OF NARNIA: THE SILVER CHAIR

THE ADVENTURE BEGINS ON THE NEXT CHAPTER OF THE NARNIA JOURNEY

LOS ANGELES, CA (October 1, 2013) – The C.S. Lewis Company has entered into an agreement with The Mark Gordon Company to jointly develop and produce THE CHRONICLES OF NARNIA: THE SILVER CHAIR, the fourth book published in C.S. Lewis’ famed fantasy series. The announcement was made today by The C.S. Lewis Company.

Mark Gordon stated, “Like many readers, both young and old, I am a huge fan of C.S. Lewis’s beautiful and allegorical world of Narnia. These fantasy stories inspire real-world passion among millions of devoted fans around the world. As we prepare to bring the next book to life, we are humbled and excited to contribute to the outstanding legacy of Narnia.”

Douglas Gresham, stepson of C.S. Lewis stated, “I have a great deal of respect for Mark Gordon’s work and am confident that together we can bring the beauty and magical delight that Narnia engenders in the hearts of those who read the books to the screen in ‘The Silver Chair.’ I am very much looking forward to diving once more into Narnia, this time with Mark Gordon and his team.”

Vincent Sieber stated, “We are very excited by this partnership and to be able to work on this movie from its earliest conception on such a collaborative basis. It gives us the opportunity to develop a script and then produce a film with some of the most talented industry professionals whilst remaining completely faithful to this much loved book.”

The first three Narnia films combined have grossed over $1.6 billion at the worldwide box office.

A classic series of seven novels that have sold over 100 million copies worldwide, C.S. Lewis’ “The Chronicles of Narnia” began with the publication of “The Lion, The Witch and The Wardrobe” in 1950. Six more novels (including the prequel, “The Magician’s Nephew,” and the sequels, “The Horse and His Boy,” “Prince Caspian,” “The Voyage of the Dawn Treader,” “The Silver Chair” and “The Last Battle”) would follow in the next six years. The final title in the series, “The Last Battle,” was awarded the highest mark of excellence in children’s literature, the prestigious Carnegie Award.

About The Mark Gordon Company

Gordon is a five-time Emmy Award nominee with two wins and has been nominated for multiple Golden Globe Awards with two wins. He earned Academy Award and BAFTA nominations and won a Golden Globe for Best Picture as producer of SAVING PRIVATE RYAN.

Gordon is the President of the Producers Guild of America and serves on the boards of The Archer School for Girls and the Virginia Film Festival. He is the former chairman of Teach for America Los Angeles and has served on the boards of The UCLA Lab School, Chrysalis, and The Motion Picture and Television Fund. Gordon is the founder of Citizens of the World Charter Schools. Gordon is a co-founder of Intern Sushi, an innovative online resource that reinvents the internship application and hiring process.