What do you think of the Bane costume? Is it total win or the drunken love child of GI Joe’s Croc Master and Mortal Kombat’s Sub Zero?

Some new Bane photos popped up today from the Heinz Field shoot for the new Batman film ‘The Dark Knight Rises’.

I like Tom Hardy a lot and I really respect Christopher Nolan, but this costume is just not doing it for me. It seems like he’s the drunken love child of GI Joe’s Croc Master and Mortal Kombat’s Sub Zero. Either way, they are some good pics and we finally get a good, clear look at the costume up close.

There is one question that I’ve got after seeing these pics. What is the deal with the little white card with numbers in his hand? Is he calling out the seat of the lucky fan who just won season passes? Maybe it is tied into some online viral, which would explain why the images are such good quality. 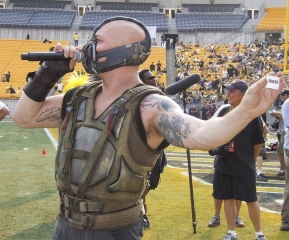