The Casting news for the Hunger Games is picking up speed and the newest announcement means that we’ll have one ore the most memorable actresses from Pulp Fiction and So I Married an Ax Murderer. 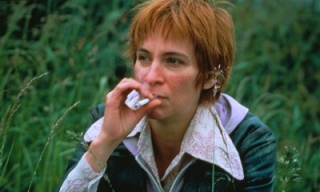 Santa Monica, CA, July 17, 2012 — Lionsgate® and the filmmakers of THE HUNGER GAMES: CATCHING FIRE are pleased to announce that actress Amanda Plummer has been cast in the role of Wiress in the much anticipated film adaptation of Suzanne Collins’ worldwide smash hit novel Catching Fire. The character’s eccentricity earns her the nickname “Nuts” from fellow tributes, and though she doesn’t communicate traditionally, her observations and contributions prove invaluable in the Quarter Quell.

Best known to film going audiences from her memorable and award nominated roles in THE FISHER KING and PULP FICTION, Plummer is also a beloved, Tony Award® winning stage actress on and off Broadway. She can next be seen as the title character in the forthcoming film ABIGAIL HARMS.

THE HUNGER GAMES: CATCHING FIRE will be directed by Francis Lawrence, and produced by Nina Jacobson’s Color Force in tandem with producer Jon Kilik. The novel on which the film is based is the second in a trilogy that has over 36 million copies in print in the U.S. alone.

Lionsgate® will release THE HUNGER GAMES: CATCHING FIRE on November 22, 2013.