The Lizard From ‘The Amazing Sider-Man’ Revealed Through Pez Dispenser

This might be the first time in history that a major movie character has been revealed via candy dispenser!

When you think about how hard Sony has tried to keep the image of Rhys Ifans as “The Lizard” in ‘The Amazing Spider-Man’, it is pretty amazing that something like this could slip through their fingers. But… I guess no one ever thinks they have to worry about a major secret being blown by candy!

The classic candy, Pez will be doing candy dispenser for the new film and they just released the images for two of the dispenser: Spider-Man and Lizard! Someone is probably going to get fired over this, but at least fans can finally start to get an idea of what the character will look like when the movie is released on July 3, 2012.

On a side note, I have to say that I’m pretty disappointed in the direction that Pez dispensers have taken lately. The majority of their charm was that they just featured the head of the character and you would flip it back and yank the candy from its throat like a little pre-diabetic vampire. This new bust style of dispenser is just a travesty. Who wants to eat candy out of Spider-Man’s belly button!?! 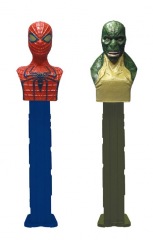