‘The Losers’ Set to Begin Filming in Three Weeks

Set for an April 16, 2010 release, the main cast was recently finalized as Holt McCallany signed onboard to play a mercenary named Wade in the film. 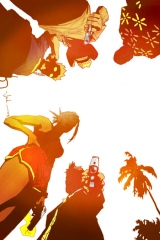 Jock who illustrated Vertigo’s “The Losers” has reported over at Standard Attrition, a group blog for Vertigo Comics creators, that the comic adaptation will begin production in three weeks in Puerto Rico.

Set for an April 16, 2010 release, the main cast was recently finalized as Holt McCallany signed onboard to play a mercenary named Wade in the film which we reported earlier.

Additionally, Jock himself has also been given the task of creating a one-sheet movie poster to give away at San Diego Comic-Con.

“I’ll be drawing a version of [the cover to] #12, with some likeness of the actors in placed of the traditional comic cast,” Jock wrote. “I’ll have to squeeze in Idris Elba as Roque too, so I guess he takes the place of the palm tree.”

“The Losers” also stars Jason Patric as Max, the man who betrayed Clay and the rest of the black ops squad. The aforementioned McCallany plays Wade, a special forces officer that has ties to the movie’s heroes.