Big changes are coming for The Walking Dead. It’s got a new showrunner. It’s about to lose both Rick and Maggie, and now we are getting ready for a time jump. A new image was released from the show today that shows Michonne and a few survivors heading somewhere, but instead of cars, they are riding horses and carriages. No, the time jump isn’t back to the past, it’s a bit forward, to the point where the gas is going bad and resources are running low. 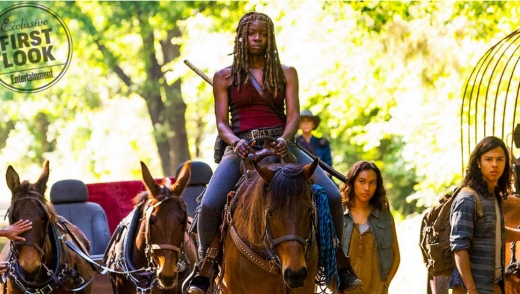 Showrunner Angela Kang had this to say about the new series:

“We’ll explore what happened as man-made objects and structures break down. Infrastructure like roads and bridges are changing and crumbling. And we’ll also explore what happens as resources are getting low. There’s a fun Western vibe that has emerged. We are going into a period where a lot of the things that we’ve seen in previous seasons have broken down, so they’ve got these horses and carriages that are being drawn around instead of cars. Things are lit with oil lamps. People are using different kinds of weaponry. There’s a real grittiness to it that I think will be fun and fresh for the viewers.”

“We’ll see our group together working in unity in a lot of ways, but you’ll also see some changes in the way that they deal with each other. In some ways, you’ll see that the vision has succeeded beyond anybody’s wildest imagination. But you’ll also see the cracks in that.”

You can bet your walker ear necklace that we’ll have the first trailer for the season by the time The Walking Dead hits Hall H at San Diego Comic-Con in a couple weeks.