The Walking Dead Webisodes: The Oath

Watch all three episodes of “The Oath” after the jump. “One Lives, All Live.”

The Walking Dead is set to return this Sunday night on AMC. Just as they did for seasons 2 and 3, AMC has put together a web-only mini series to get fans pumped up. This year, the series is called The Oath.

The three part series focuses on two survivors, Paul and Karina as they try to stay ahead of the walkers in the face of a mortal injury.

In the first part of The Oath – “Alone,” Paul and Karina escape their ravaged and overrun camp, but a mortal injury sends them on an urgent mission to find medical help.

In the second part of The Oath — “Choice,” Karina encounters an unexpected survivor in the medical facility as Paul’s health deteriorates.

In the third and final part of The Oath — “Bond,” Karina and Paul are forced to make life and death choice. 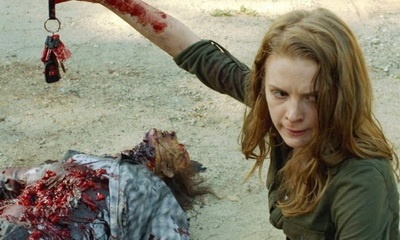