If you are reading this column and have not been living under a rock, you are aware that The Walking Dead television series will be premiering on AMC this weekend.

The weekend we have all been waiting for is finally here! Yes, it is Halloween. But that is not what I am referring to. If you are reading this column and have not been living under a rock, you are aware that The Walking Dead television series will be premiering on AMC this weekend. If our early review wasn’t enough to get you excited, news of the multiple zombies seen across the globe must have. 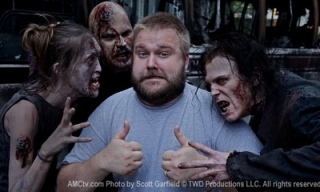 In one of the coolest publicity stunts I have seen, AMC unleashed hordes of zombies in major cities across the globe this week. Zombie Commute Day took effect on Tuesday everywhere from Washington, DC to Istanbul, Turkey. The zombies were found in 26 major cities worldwide. 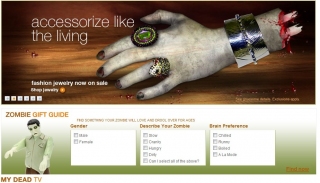 Major retailer, Sears, has boarded the zombie band-wagon. If you type in your browser “sears.com/zombies”, you will be redirected to a Sears website catering to the undead http://zombiesandtoys.blogspot.com/2010/10/sears-caters-to-zombies.html . The new site features ads and banners all aimed at selling merchandise to zombies! There’s a video advertisement featuring some zombie shoppers and even a gift finder to assist in your purchases. While you are there, make sure to play around with the working Zombie Friend Maker. 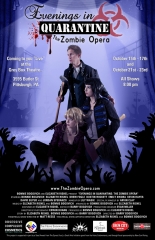 To help get you in the mood for Halloween, we featured several reviews to help you decide how to spend your time. If you are fortunate enough to live near Pittsburgh, PA, try to grab tickets to Evenings in Quarantine: The Zombie Opera. This must be one of the most unique zombie events I have heard of and makes me wish I lived closer to the zombie capital. 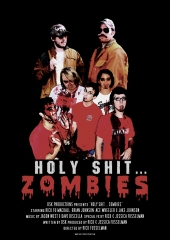 Also reviewed this week was the film, Holy Shit… Zombies! While it does not seem like it will appeal to everyone’s taste, you have to admit the title is catchy.

If you recall the Resident Evil zombie shirt that was given away at last year’s comic con, these new shirts will look familiar. While you will not have them in time to use as a Halloween costume, you cannot deny that they are worth wearing year-round. With the front beckoning observers to ask about your zombie shirt, you oblige by giving the shirt a flip http://zombiesandtoys.blogspot.com/2010/10/zombie-shirts-to-flip-for.html . After a flip, you’re a zombie! 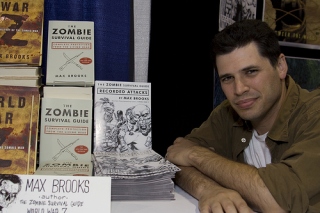 To help prepare us for the inevitable zombie apocalypse, National Geographic is giving us an insight to the truth behind zombies http://zombiesandtoys.blogspot.com/2010/10/national-geographic-truth-behind.html . Hosted by none other than zombie expert, Max Brooks, this documentary will explore the origins of the zombie as we know it.

As a reminder, this weekend is your last chance to enter the many contests we have running over at Zombies & Toys. And next month will be even better! We will be celebrating out second year on the interwebs. As a thank you to everyone who reads and supports Zombies & Toys, we will be giving away all sorts of prizes! We have art prints, books, clothing, toys, movies, and much, much more. We will also be giving away exclusive prizes to Facebook fans and Twitter followers so make sure to add us now.

Make sure to stop back next week and have a safe Halloween!