It looks like you can kiss the Michael Bay era goodbye and hello to the shared Hasbro universe of Micronauts, GI Joe, Transformers, and D&D.

Despite being really horrible films, Michael Bay’s Transformers series has earned ton of money. In fact, the movies have earned over $3.6 billion globally. However, the last film in the series, “The Last Knight”, earned nearly half a billion dollars less than the film that came before it. That’s bad news for a studio who is looking towards a franchise as one of its main tentpoles.

We know that there are several more films coming up from Transformers, including the Bumblebee film that is set as a prequel to the current saga of films. After that one hits theaters though, it looks like you can kiss the Bay era goodbye because Paramount is looking at a possible reboot of the whole thing. Based on several reports from Hasbro over at Toy Fair, it’s now expected that the failure of Transformers: The Last Knight to keep up with previous releases in the box office department has spurred Hasbro and Paramount to go in a new direction.

Our bet is that this new direction will be to re-introduce the Transformers as part of the shared Hasbro Universe that was laid out in the toy company’s Toy Fair presentation. While showing off new toys to reporters, they revealed one slide that included release dates for the following films:

It’s a good bet that the event in question will be the aforementioned Transformers reboot, combining with a chance to bring that new film universe together. 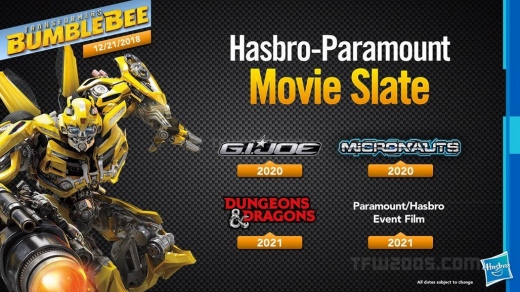