Sad but not unexpected news for fans of the series.

I didn’t know that this wasn’t already official, but SyFy has now officially cancelled Sanctuary. It was a pretty good show, so I’ll be sad to see it leave, but at least they ended it at a spot that could have made perfect sense for a series finale and not on some crap ass cliffhanger (I’m talking to you Breakout Kings!).

On the upside, fans of the cast can catch Amanda tapping and Robin Dunne together soon in a sci fi comedy with Kristen Kruek called “Space Milkshake“. 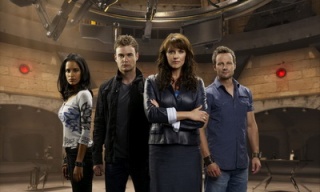