In case you didn’t hear the million squealing girls when it was announced earlier today, we are getting our first glimpse of what we can expect to see bundled into the Twilight DVD 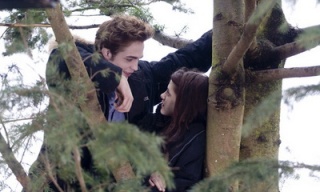 In case you didn’t hear the million squealing girls when it was announced earlier today, we are getting our first glimpse of what we can expect to see bundled into the Twilight DVD that will be hitting March 21.

–Audio Commentary by director Catherine Hardwicke, and stars Robert Pattinson and Kristen Stewart. –Five Extended Scenes with introductions by the director –Five Deleted Scenes with introductions by the director –Three Music Videos from Muse, Paramore and Linkin Park –The Adventure Begins: The Journey from Page to Screen — A seven-part documentary –Comic-Con Phenomenon featurette

Star Robert Pattinson told RobertPattinsonOnline.com that some of the outtakes that’ll be on the DVD will feature a tad scarier Edward, “There’s quite a lot of stuff. We fought the big fight scene at the end within the first week, and I was really convinced that the way I established the character arc that Edward needed to be 100 percent demonic in the last fight. “The monster”, which he always says he is to Bella, I wanted him to become that at the end.

“I kind of psyched myself up a week to do this nuts fight. As soon as I started doing it I don’t think anyone expected me to do it like that so they were like, “Uh, tone it down.” I had maybe thirteen takes where my direction was “tone it down,” on every single take.

“I had no idea what was going on. I would love to see what the first take was, especially after seeing the final thing with one bit of the fight with me and Cam. Where we were growling at each other, where we both were really into it like we were vampires.

“When we watched the playback afterwards, there was a big bright light and we didn’t realize, we thought it was kind of dark and you could just see these two guys, one with a bouffant hair cut and the other with his abs just there like “Argh!”

He added: “It’s the most ridiculous thing I’ve ever seen in my life. I hope that’s on the DVD, it’s quite funny.