Two More Dwarves Images Have Been Released From ‘The Hobbit’

Yesterday, the world caught a glimpse of the dwarves — Nori, Ori, and Dori — today, we get our first look at at distant cousins Oin and Gloin.

Yesterday, the world caught a glimpse of the dwarves — Nori, Ori, and Dori — from director Peter Jackson’s “The Hobbit: An Unexpected Journey.” Today, we get our first look at at distant cousins Oin and Gloin.

The photo shows John Callen as Oin and Peter Hambleton as Gloin.

Here’s the official description of the image:
Distant cousins of Thorin Oakenshield, these two doughty Northern Dwarves join the Company out of a sense of loyalty to their kin, and also because they have a substantial sum of money invested in the venture. Along with Bombur, Gloin is the only other married Dwarf in the Company (there being a shortage of female dwarves in general). His wife is an acclaimed beauty with a particularly fine beard. Gloin is the proud father of a young son, Gimli, who will go on to become part of the famous Fellowship of the Ring. 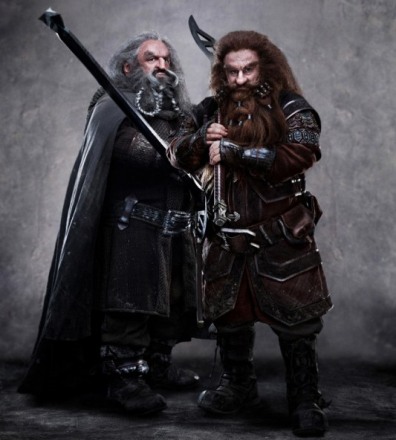