Directed by Marcus Nispel, this might be the best “Conan” poster release and the best film poster I’ve seen this summer.

Lionsgate has released a brand new poster for the upcoming “Conan the Barbarian” reboot starring Jason Momoa, Stephen Lang, Said Taghmaoui, Rachel Nichols, Rose McGowan and Leo Howard. Directed by Marcus Nispel, this might be the best “Conan” poster release and the best film poster I’ve seen this summer. If you weren’t sold on the film yet, this may sell you pretty hard.

Here’s the Synopsis:
Conan is a young Cimmerian man cast adrift in the world by the brutal murder of his father and the destruction of his village. Driven by the need to avenge himself upon the evil Khalar Zym, Conan learns to steal, seduce, and fight his way to his goals. He soon discovers, however, that there are greater things at stake than his own personal quest: an unearthly malevolence stalks the world, and it may be up to Conan himself to save Hyboria from ruin. 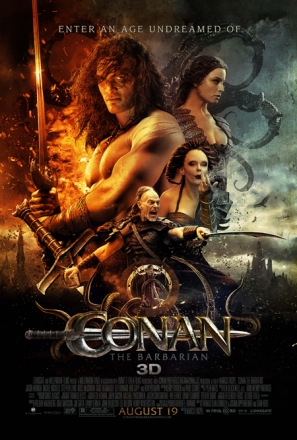