VENOM And THE SINISTER SIX Movies Are On The Way

Huge news today for Spidey fans. Today, Marvel and Sony have announced that they’ll be expanding the Spider-Man Franchise with both a Venom and a Sinister Six film.

Huge news today for Spidey fans. Today, Marvel and Sony have announced that they’ll be expanding the Spider-Man Franchise with both a Venom and a Sinister Six film. This marks the first time that we will get Marvel films built around the villains and not the heroes.

Additionally, they’ve announced that The Amazing Spider-Man 3 will go into production next fall (hopefully with Webb behind the camera) and is set for a June 10, 2016 release.

As for the Venom movie, Alex Kurtzman is set to direct. Drew Goddard, who is currently working on the Daredevil series for Netflix Drew Goddard is set to write and hopefully direct The Sinister Six film. 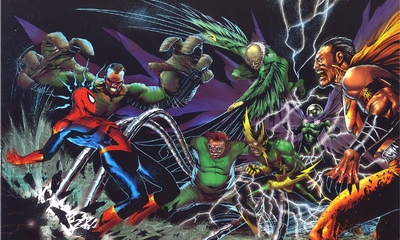 CULVER CITY, Calif., December 12, 2013 – In a move to forge a new legacy in the story of Peter Parker on screen, Sony Pictures Entertainment, in association with Marvel Entertainment, is developing several new projects in the Spider-Man franchise, with Alex Kurtzman, Roberto Orci, Jeff Pinkner, Ed Solomon, and Drew Goddard to collaborate on overseeing the developing story over several films that will be produced by Avi Arad and Matt Tolmach, it was announced today by Doug Belgrad,president of Columbia Pictures, and Hannah Minghella, president of Production for the studio.
The five writers, along with the two producers and Marc Webb, have formed a franchise brain trust to expand the universe for the brand and to develop a continuous tone and thread throughout the films. Under the deals, the studio announced that Kurtzman & Orci & Pinkner are writing the screenplay for The Amazing Spider-Man 3, which the studio hopes Webb will return to direct; the film will go into production next fall for release on June 10, 2016. In addition, the team will build on the cinematic foundation laid by Webb, Arad, and Tolmach in the first two movies. They will expand the franchise as Kurtzman & Orci & Solomon will write the screenplay for Venom, which Kurtzman will direct; also, Goddard will write, with an eye to direct, The Sinister Six, focusing on the villains in the franchise. Hannah Minghella and Rachel O’Connor will oversee the development and production of these films for the studio.
In tapping these five writers, the studio and the producers are guiding the future of the franchise with the writer/producers who have each played significant and key roles in developing such highly successful franchises, films, and series as Star Trek, Transformers, “Alias,” “Fringe,” Men in Black, Bill & Ted’s Excellent Adventure, World War Z, “Lost,” Cloverfield, The Cabin in the Woods, and Marvel’s upcoming “Daredevil” series.
Commenting on the announcement, Belgrad said, “The Spider-Man film franchise is one of our studio’s greatest assets. We are thrilled with the creative team we have assembled to delve more deeply into the world that Marc, Avi and Matt have begun to explore in The Amazing Spider-Man and The Amazing Spider-Man 2. We believe that Marc, Alex, and Drew have uniquely exciting visions for how to expand the Spider-Man universe in each of these upcoming films.” Arad and Tolmach added, “This collaboration was born out of the great experience we and Marc had working with Alex, Bob, and Jeff on The Amazing Spider-Man 2. With more than fifty years’ wealth of stories in the comic books to draw upon for inspiration, the Spider-Man universe is truly boundless; in addition, the Spider-Man comics have the greatest rogues gallery of any series, and to have the chance to explore that on film is truly thrilling. Until now, we have approached each film as a separate, self-contained entity, but with this move, we have the opportunity to grow the franchise by looking to the future as we develop a continuous arc for the story. That is what Alex, Bob, Jeff, Ed, and Drew will do in this unprecedented collaboration, and we’re excited about the directions they are taking the character and the world.”