Watch the Fake Trailer for MACHETE KILLS AGAIN… IN SPACE

We can all thank whatever higher power we pray to that this movie won’t ever actually happen.

I’ve always felt like Machete was the kind of movie that sucked, but sucked in a stylish enough way that a lot of people went along with the rumor that it was an awesome film, when it was actually just a crapfest. With the sequel, Machete Kills, only bringing in 14 million, I’m apparently not the only one.

A couple years ago Robert Rodriguez announced that he wanted to make the series a trilogy. With the box office as bad as it was on part two, you can almost bet that #3 is not on the way. However, When the sequel was released, it came with this fake trailer that played before the movie, MACHETE KILLS AGAIN… IN SPACE. I have a feeling it might have been the most entertaining thing on screen aside from Sophia Vergara’s machine gun boobs and pistol Cod Piece, both of which were shown online months ahead of time.

Now, thanks to Reddit, the fake trailer is online, so check it out while you can! 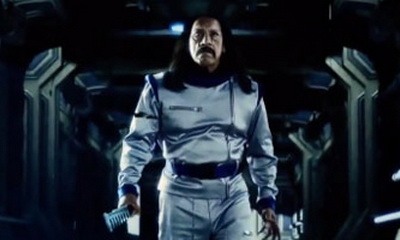