I don’t care if it sounds like a knock off of “Escape Fro LA”, It still looks pretty awesome.

Official Synopsis:
Starring Guy Pearce and Maggie Grace and set in the near future, LOCKOUT follows a falsely convicted ex- government agent (Pearce), whose one chance at obtaining freedom lies in the dangerous mission of rescuing the President’s daughter (Grace) from rioting convicts at an outer space maximum security prison 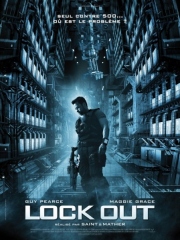