Dark Horse will provide new life for Whedon’s canceled television show “Dollhouse” by bringing it back in the form of a new comic book series.

Dark Horse Comics has announced that they will be providing new life for Joss Whedon’s canceled television show “Dollhouse” by bringing it back in the form of a new ongoing comic book series.

This new was announced during their panel at New York Comic-Con over the weekend. The new series will be in continuity and pick off where the show had ended. Here’s the official press information regarding the new series.

DOLLHOUSE: The new comic book series will continue the story begin in the Joss Whedon show about mind-wiped women who could be reprogrammed to become anyone. Like “Buffy: Season 9,” the Dollhouse comic will take place after the conclusion of the show — quite a while after the show, as it leaps forward into an apocalyptic future where the mind-wiping technology has left Los Angeles in ruins, a storyline teased in the season finales “Epitaph One” and “Epitaph Two.” The series will be scripted by “Dollhouse” series writers Jed Whedon and Maurissa Tancharoen, with art by Cliff Richards, and the first issue is slated for sometime in 2011. 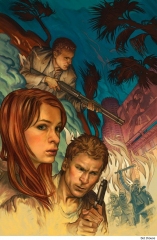