Find out when Wolverine will actually start filming and which Israeli model might be trying to kill Logan after the jump!

Two big bits of news just came out about the upcoming Wolverine sequel starring Hugh Jackman. First up, recent news that the filming was set to begin in November seems to be less accurate than everyone in the media had assumed. Now the news is that scheduling conflicts and various other snafus have made it so the movie won’t actually start to film until sometime early next year.

Here’s what the studio had to say:

The studio says it never officially [had a start date for] the sequel. But now that may push back to Spring 2012. The screenplay mostly takes place in Japan. But studio insiders tell us it’s hard finding just where to shoot in Japan these days because of weather-related considerations. Now the location might switch to Canada. But we’re also hearing that the start date will wait until after Jackman finishes making Les Miserables. There’s no question that 20th Century Fox wants the pic badly and has been trying to get its sequel to the X-Men spinoff rolling for quite awhile now.

While that news is a bit of a bummer, we do have some potential casting news that is pretty interesting. It looks like one of the female huntresses tasked with killing Wolverine in the movie is getting close to being claimed by Sarai Givaty.

For those of you who think that a model is a sucky pick to be a hunter, keep a couple of things in mind. First, she has already done some action work on film when she played the role of Ziva David’s (Cote De Pablo) nemesis on NCIS. Also, she’s Israeli. That means that she served several years of compulsory service in the Israeli military. That means, she is probably better prepared for an action role than most actresses… and she can most certainly kick your ass.

ISRAELI HOTTIE SARAI GIVATY IS reportedly doing really well in the auditions for ‘The Wolverine,’ the next installment in the X-Men movie franchise.

Apparently Givaty has already passed two auditions for the role of one of Wolverine’s sexy hunters, and now she’s set for an audition with the movie’s director, James Mangold

Sarai Givaty has already claimed her fame when she guest- starred in the #1 TV show ‘NCIS’ as Ziva’s nemesis, and she recently finish filming ‘Black Velvet’ opposite Ray Wise (‘Twin Peaks,’ ’24′). She’s currently finishing recording her debut album in Israel, from which the first single has already been released, called ‘Paris’. 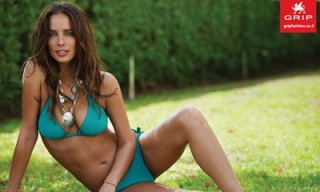