According to DC Comics senior VP of creative affairs Gregory Noveck, only fans can save Teen Titans: The Judas Contract. 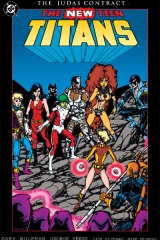 According to DC Comics senior VP of creative affairs Gregory Noveck, Teen Titans: The Judas Contract is not completely dead in the water. Noveck, told fans who attended the Wonder Woman DVD Premiere at Wondercon 2009 that Judas Contract still has hope of being revived and it has merely been postponed extensively for other projects.

Noveck explains that the reason the direct-to-DVD movie was canned, was because of how poorly it was always received and rated among DC’s market research and focus groups. In the votes, Judas Contract always ranked last on everyone’s list.

Do not despair however, Noveck insists that if fans want to see Teen Titans: The Judas Contract, all they have to do is rally for it and rate it higher next time. He warns that fans should NEVER vote for any Superman or Batman adaptation because regardless of outcome they will most likely be made.

The key is to ask for other characters and to show interest in them. DC already knows that the A-listers can sell, they don’t need to be reminded.