Based in a fictional small town named Happlin, the series is about the mystery involving the return of a serial killer who goes by the name “The Magic Man,” as people start to mysteriously disappear. 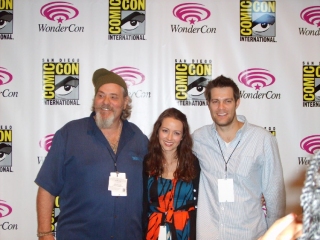 One of the big new TV shows making a splash at this year’s Wondercon is the new ABC drama mystery, “Happy Town.” The show is being hailed as a combination of “Salem’s Lot” and “Twin Peaks” (actually less “Twin Peak” and more Stephen King!) and stars “October Road’s” Geoff Stults, “Angel” and “Dollhouse” alum Amy Acker and “Lost’s” M.C. Gainey.

Based in a fictional small town named Happlin, located in a close-knit community in Minnesota, the series is about the mystery involving the return of a serial killer who goes by the name “The Magic Man” as people start to mysteriously disappear. ABC is hoping that the show will fill the black hole sized gap that will be left when “Lost” closes up shop this season. According to producer Josh Appelbaum, “Happy Town” was created for ABC because they specifically wanted a scary show. But that doesn’t mean that “Happy Town” is actually rooted in the supernatural. In fact, it’s not supernatural at all according to the cast and producers.

Stults who plays Tommy Conroy is a deputy who works alongside his father and Sheriff of Haplin, Griffin Conroy (Gainey). Having always lived in his father’s shadow, Tommy is confronted with change and forced into becoming a reluctant protagonist of the show. Meanwhile Acker plays Tommy’s wife Rachel and it’s revealed by Stults that she actually may have a bigger role than her character’s currently leading on.

Acker herself even admits that while this may be the first time she hasn’t killed anyone on set, there’s the chance that even she may even be the Magic Man. You just can’t rule anybody out!

While the first season only has eight episodes, it’s been said repeatedly that by the finale the audience will know who the mysterious Magic Man is, although the characters in the show will not. Unlike “Lost” and other mystery shows, each episode will have answers that build up to the final reveal so the audience won’t be left in the dark. This was done specifically because the producers hated the “Lost” formula and didn’t want to frustrate the audience. But fans who might be worried that the show will lose its mystery should not, because even though the Magic Man may be revealed it will instead open up new layers and new depth to not only the characters but also the plot of the show.

Other tidbits:
– It may not be supernatural, but it doesn’t mean it can’t be aliens or robots from space. Acker agrees!
– Are the people actually people?
– Notice the animals? Something might be going on with them.
– There’s an ever changing storyline
– “Happy Town” was created with Stults in mind from the get go. The producers felt he was an up and coming star and wanted to tie him to their project before someone steal him away.
– Producers believe that “Happy Town” can be a success due to its small town show feel with a central mystery and some basic old school storytelling. No vast characters or global interference like most other shows.

Official synopses: The residents of the sun-splashed town of Haplin, Minnesota — also known as “Happy Town” — have enjoyed an uneasy peace for the past five years — but that is about to change. Still haunted by a number of unsolved kidnappings, Haplin now faces a disturbing new crime that brings all of its unresolved fears to the surface. Has the elusive “Magic Man” – who many believe is responsible for the bizarre abductions — returned to claim yet another innocent victim? As Haplin’s mysteries are revealed, many of its prominent citizens’ motives come under scrutiny as their own secrets and personalities are peeled back one layer at a time.