The panel for Disney’s upcoming “The Prince of Persia: The Sands of Time” opened with two new scenes and several talents including Prince of Persia creator Jordan Mechner and Jake Gyllenhaal. 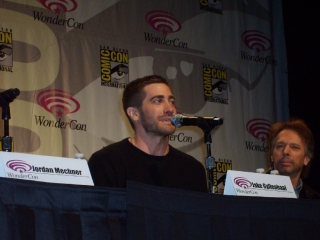 The panel for Disney’s upcoming “The Prince of Persia: The Sands of Time” opened with two new scenes and several talents including producer Jerry Bruckheimer, director Mike Newell, writer and Prince of Persia creator Jordan Mechner and actor Jake Gyllenhaal who were all present to field questions from fans.

Bruckheimer introduced the first scene as the “Siege on Alamut.” It was an intense heart-thumping action sequence where Prince Dasten (Jake Gyllenhaal) comes up with a plan to invade from the back while his brother invaded from the front.

Dasten, with help from a group of men poll vaults up a side of the wall in a very pakour style manner. But the side of the wall is still being too high, so he has his marksmen shoot arrows into the wall turning them into steps and things to grab so he could scale upward. Once he reaches the top, he silences a guard by grabbing him and smashing him against a wall. Dasten then lets down a rope to let the other men up.

We see some fantastic battle scenes and Dasten using his twin blades. Datsen running up walls and swinging from a rope while standing at the very top of a roof. I have to add that the scenery shown in this clip was fantastic and a complete visual treat. It takes you straight into the era and the location. You could almost feel the 120 degree heat! The scene ends with Dasten battling a fighter with a spear on a mounted horse. Dasten knocks him down and the two tumble on the ground for a bit before an object wrapped in red is dropped… which ends up being the Dagger of Time.

The second scene shows how the Dagger of Time worked. Although we’ve caught glimpses of it in the trailer, we finally get to see it in full and it’s vastly impressive. Director Mike Newell had describe the effects similar to the disintegration of molecules and then rebuilding it rapidly (similarly to the properties of sand). It opens with Dasten and Tamina (Gemma Arterton) talking to each other at night and Tamina trying to grab the dagger tucked away in his belt. He shoves her aside and all civilness is thrown out the window as she draws her sword and begins to attack him. Dasten accidentally triggers the Sand of Time by pressing the top handle of the dagger. The effects slows down time and the dagger catches on fire as Dasten crumbles into sand and sort of jumps and separates from his body. He becomes a spectator to the events that unfolds around him and then just as quickly as he discombobulates, he’s brought back in time and relives the previous moment when Tamina tried to grab the dagger.

Dastan does this another time, this time pressing the button on purpose and he’s able to stop Tamina from trying to attack him with her sword. Tamina eventfully catches wise to what he’s been doing and by the time they both realize it, Dastan had used up all the sand stored in the dagger. The scene continues with several extended scenes and various moments from the film which we’ve all seen originally as quick cuts from the trailer such as all the snake scenes.

According to Gyllenhaal, he had to learn to speak with a British accent for the film, as well as learn parkour from the founder, David Bell, who was notoriously difficult to find because he had no phone number or email. Gyllenhaal has been a fan of the game since it’s 2D side scrolling days. Never did he imagine that one day his life would cross with its creator Mechner.