The 3D teaser trailer for “Resident Evil: Afterlife” premiered exclusively tonight at Wondercon 2010 and it was definitely worth the wait. 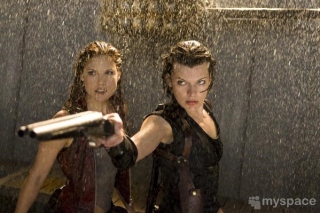 The 3D teaser trailer for “Resident Evil: Afterlife” premiered exclusively tonight at Wondercon 2010 and if you weren’t able to catch it, it’ll be shown again tomorrow (Saturday) at the “Resident Evil: Afterlife” panel in the Esplanade Ballroom at 1:45 with guess stars writer/director Paul W.S. Anderson, Ali Larter (Claire Redfield) and Milla Jovovich (Alice). If you’re one of those unlucky few stuck at home and somewhere in…. say, Alaska, don’t worry, the trailer is slated to surface online over the weekend albeit not in 3D of course.

I won’t really go into the play-by-play because that’d just spoil it for you and honestly, because I was too busy watching it than trying to take notes in the dark. It begins with a voice over by Alice narrating the events that had unfold. Apparently five years ago the virus had escaped and a lot of people died. We see Alice with swords strapped to her back and then suddenly she goes all ninja assassin and there are cuts after cuts of action scenes with a few 3D elements thrown in. We see ninja stars flying towards us, some slicing of SWAT guys and a really cool scene where a baddie literally pulls a move similar to K Prime’s super move of the King of Fighter video game by plucking and throwing his sunglasses at us.

We are introduced to Clarie and some pretty sick looking zombie. We then see Claire and Alice together (the images we’ve seen already) and all hell is breaking loose around them. Lot of gun fire and a daring move where they dive out of a building while still firing off rounds (very Matrix like). It ends with title and then cuts back to Alice throwing a knife being all bad assy.

Things that we learned:
-Resident Evil: Afterlife was shot using the same Fusion camera system James Cameron used for “Avatar.”
-I’m a little worried about the plot because honestly, we didn’t learn much from this teaser and it is written by W.S. Anderson.
-But what I do know is that it will be completely over the top with its slow-mos, fight scenes, and the occasional 3D effects (maybe reconsider watching this in 2D?).

The official synopsis:
“In a world ravaged by a virus infection, turning its victims into the Undead, Alice (Jovovich), continues on her journey to find survivors and lead them to safety. Her deadly battle with the Umbrella Corporation reaches new heights, but Alice gets some unexpected help from an old friend. A new lead that promises a safe haven from the Undead leads them to Los Angeles, but when they arrive the city is overrun by thousands of Undead and Alice and her comrades are about to step into a deadly trap.”