The folks over at FOX Home Entertainment have hooked us up with a couple of copies of Stoker, starring Academy Award® Winner Nicole Kidman*, Mia Wasikowska and Matthew Goode and directed by Park Chan-wook (Oldboy).

Following the tragic death of her father on her eighteenth birthday, India Stoker (Wasikowska) meets Charlie (Goode), her charismatic uncle, whom she never knew existed. When Charlie moves in with India and her unstable mother (Kidman), both are drawn to his charming and calming demeanor. But it soon becomes clear that Charlie’s arrival was no coincidence, and that the shocking secrets of his past could affect India’s future…or shatter it completely.

Here’s how it works:
1. You can enter once a day to win the featured prize.
3. Answer the “Question of The Day”
4. Be sure to follow us on Facebook and/or Twitter @youbentmywookie and RT: “Win a Stoker on Blu-Ray At YBMW! http://bit.ly/12pWXT3″ 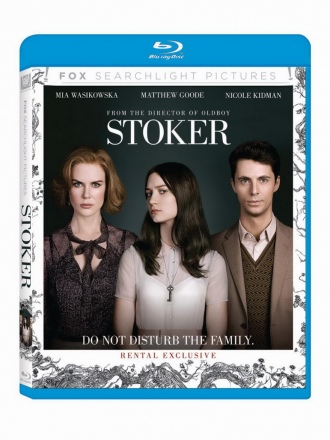