You Thought the “9” Trailer Was Cool. Check Out The Original Short 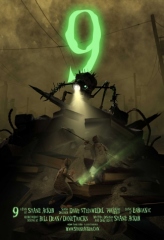 A little under a month ago, we showed you the super cool trailer for the upcoming CGI epic, 9, which is being produced by Tim Burton and voiced by Elijah Wood, John C. Reilly, Jennifer Connelly, Martin Landau, Christopher Plummer, and Crispin Glover.

What some people don’t know is that the film is based of a really cool short film by Shane Acker. Check it out below.