Zach Braff Launches Kickstarter for Next Film, WISH I WAS HERE

Zach Braff hasn’t directed a film since his critically acclaimed Garden State. He was just about to sign a big finance deal for his newest script, Wish I Was Here, but the money came with too many strings over the direction of the film and the casting. After seeing Veronica Mars kick ass on Kickstarter, he decided that it might be the way to go. It seems like he was right. The project just went up this morning and it has already raised over $900,000 of its $2,000,000 goal.

To help bolster his argument, he’s brought in some cameos to his kickstarter video that make it hard for fans to ignore. First up, Big Bang Theory’s Jim Parsons appears in the video and will hopefully also be playing the role of Braff’s best friend inf the movie. Donald Faizon, Braff’s Scrubs co-star who will soon be appearing in Kick Ass 2, also makes an appearance.

Braff goes on to mention that the film is hoping to shoot scenes at Comic Con because of a cosplay storyline that’s involved in the movie… Enter Chris Hardwick.

I really enjoyed Garden State when it came out and I was in my 20’s. Now, when I look back at it, it seems a little whiny… but then again, I probably was too in my 20’s. It’ll be interesting to see how Braff’s writing and directing has matured and we are really hoping that the film does get funded.

Here’s the link to his Kickstarter

Film Synopsis:
“Wish I Was Here” is the story of Aidan Bloom (played by me), a struggling actor, father and husband, who at 35 is still trying to find his identity; a purpose for his life. He and his wife are barely getting by financially and Aidan passes his time by fantasizing about being the great futuristic Space-Knight he’d always dreamed he’d be as a little kid.

When his ailing father can no longer afford to pay for private school for his two kids (ages 5 and 12) and the only available public school is on its last legs, Aidan reluctantly agrees to attempt to home-school them.

The result is some funny chaos, until Aidan decides to scrap the traditional academic curriculum and come up with his own. Through teaching them about life his way, Aidan gradually discovers some of the parts of himself he couldn’t find. 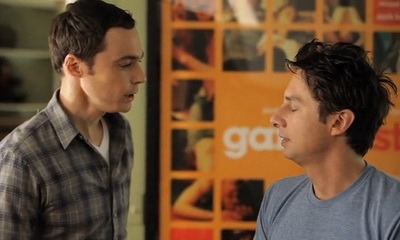