What what happens when Studio Ghibli and the Minds Behind Evangelion team up to create a live action Kaiju film!

About a year ago, this film was commissioned for a museum exhibition in Japan. Thankfully, it is now available online for everyone to see.

Thanks largely in part to Guillermo Del Toro’s upcoming Pacific Rim, the word Kaiju is starting to become a household word, but up until now, it was largely a secret treasure that Japan held the keys to.

About a year ago, news hit in Japan a film was going to be made under the name, Giant God Warrior. There was something special about this Kaiju film though. It had legendary status written all over it since the beginning. First, it was commissioned by Anno Hideaki, the director of Neon Genesis Evangelion and it was set to be directed by Higuchi Shinji, one of the key Evangelion artists.

Next, it was set to reunite Anno with Hayo Miyazaki, under whom he got his start as an animator on Nausicaa Of The Valley Of The Wind. Miyazaki actually provided the designs for the giant god monster himself and this film is also, from what I was able to research online, Studio Ghibli’s first live action film.

Do yourself a favor and watch this on full screen. 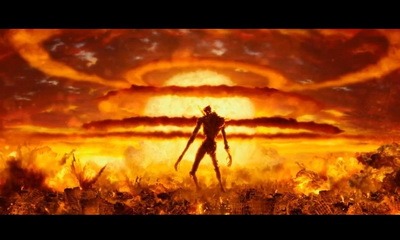