While I’m not a big fan of this whole Ten-year challenge nonsense, I can’t think of a better use for it than to release the first poster for the sequel to a film that came out a decade ago. That’s exactly what happened today for the Zombieland sequel, now officially titled: “Zombieland Double Tap”. The new poster recreates the poster from the original film released back in 2009 and features all of the original cast members: Emma Stone, Jesse Eisenberg, Woody Harrelson, and Abigail Breslin.

We don’t currently know too much about the film, just that the whole cast is back and they’ll be joined by Zoey Dutch and Rosario Dawson in currently undisclosed roles. We also know that there are rumors about both Bill Murray and Dan Aykroyd appearing in the film in some capacity.

With the first poster out, we can only hope that the trailer won’t be far behind. We don’t expect them to drop the $5 million it costs for a Super Bowl spot, but with any luck, we’ll be seeing something soon.
Zombieland: Double Tap hits theaters on October 11. 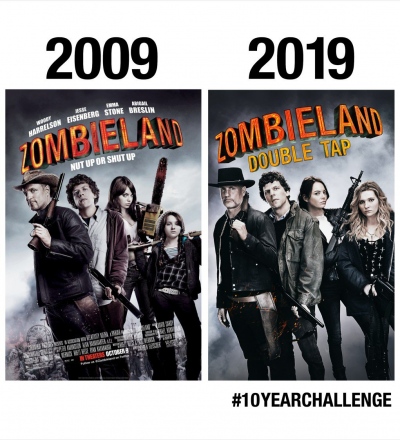