We get our first look at a zombie this time, along with new images of Brad Pitt’s character trying to save a girl from being trampled. Ya, what a stud. 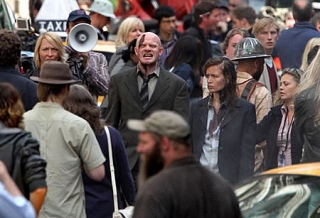 Here are some new set images from the Marc Forster directed adaptation of Max Brooks’ novel “World War Z.” We get our first look at a zombie this time, along with new images of Brad Pitt’s character trying to save a girl from being trampled. Ya, what a stud.

Here is what Max Brooks had to say about the production:

“It’s incredible. Brad Pitt really conquered the city. I’ve never seen this much enthusiasm for a film and everyone is really excited to be working with all these people cheering and watching. I was on set watching a scene where Brad Pitt is running with his family, and a hundred extras running with him, and behind us was a crowd of about 500 people just watching. The assistant director said how great it would be if only we had the money to hire all the people in behind us. I also had lunch with the zombies and they’re great. They look very much like what my impression would be of new zombies who had not really begun to rot, kind of like phase one zombies. They have a zombie school, where they are teaching extras how to act like zombies, and from talking to people on set they have really put a lot of research into everything. It was incredible to see it for myself and I’m still amazed they are making a movie of the book. I heard Brad Pitt had optioned the rights and I thought, ‘That’s cool’ but it probably wouldn’t ever get made because most optioned projects never do, so it was the biggest shock in the world to me when my wife showed me pictures on her computer of Brad Pitt in Malta filming World War Z. I’m still waiting to wake up from this one.”