Check out some of our photos from Fanime 2010!

Fanime 2010 kicked off during Memorial Day’s weekend in San Jose, California where Otakus and cosplayers alike converged at the San Jose McEnery Convention Center. It was pandemonium, it was chaos, it was pure unadulterated anime madness of ninjas, mechas, Lolita maids, super heroes and demon slayers.

Popular Japanese voice actress and singer/song writer Halko Momoi made a second appearance much to the fans delight giving several performances throughout the weekend. And while Fanime is not like traditional comic cons, it does sport the usual artists’ allies, a fantastic masquerade ball, swap meets, game rooms, karaoke and the always epic Black and White Ball with an extra hour Otaku rave.

Courtesy of our Anime corespondent, Eliza, check out some of the cosplaying attendees at this year’s Fanime event.

Also as a reminder, our contest giveaway for Kotobukiya’s “Otacool Volume 1 & 2” about cosplaying and Otaku styled rooms of fans from all over the world is still ongoing! You can also check out our review of Otacool V.2 about the amazing world of Cosplay here. 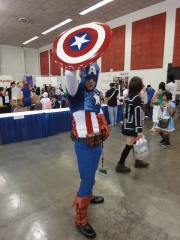