Comic Con might not officially begin until the doors open for preview night, but Youbentmywookie.com is here and you can already see the show beginning to take shape! 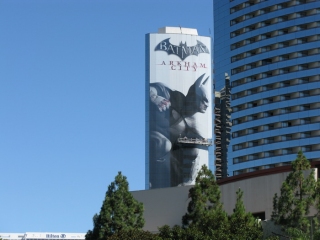 Comic Con might not officially begin until the doors open for preview night, but Youbentmywookie.com is here and you can already see the show beginning to take shape!

The first thing that you can’t help but notice are the tremendous billboards that have become a staple of Comic Con. There are three main billboards this year: Batman Arkham City, Cowboys and Aliens and Immortals. Check out the gallery and you’ll get a chance to see how Arkham City video take shape.

Once we got inside the convention center we saw something a lot different than you will see when the show opens Wednesday night. Many of the booths are just being constructed now. Some of the big set pieces are truly impressive though. I’m sure that one of the hottest photo ops will be people having their picture taken with the life-sized Optimus Prime at the Hasbro Booth.

Over at the Sony booth,t hey were building something that looked like it was equal parts time machine and margarita mixer. It is either something from Men in Black 3 or Total Recall… we’ll know soon enough!

One of the big bits of awesome is that the Marvel folks are definitely putting something together for The Avengers at Comic Con. They won’t say what and they didn’t take too kindly to strangers, so I guess that is another secret that we will have to wait to be revealed. 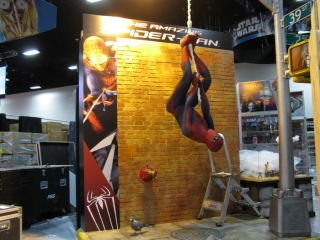 I’m not sure how you could get your photo taken with him, but there is a sweet looking floor to ceiling sized Jake from Cartoon Network’s Adventure Time.

Some of the photos that I’m looking forward to getting once the show opens are over at the DC booth. It looks like they will be featuring some Heath Ledger Joker Costumes from Batman The Dark Knight. Also, they have a really sweet display of customized ‘Spy vs Spy’ figures.

We are going to bring you complete coverage of the show as well as interviews and panel coverage. Be sure to keep checking back for the latest on Comic Con.

Also, Keep an eye out for anyone in a Youbentmywookie T-shirt. Give them some candy or at least a high five.