Season Two’s finale of “Walking Dead” was last weekend. The bright side? I got to see it. The down side? I have to wait till the FALL UNTIL I CAN WATCH MORE!!! NooOOOoooOOOooOOooo!!!!!

Season Two’s finale of “Walking Dead” was last weekend. The bright side? I got to see it. The down side? I have to wait till the FALL UNTIL I CAN WATCH MORE!!! NoooooOOOOOoooOOOOooOOOOooo!!!!!

The first season of this show was a nail biter. It was crazy, it was scary, it made me jump every time I saw a shadow move in the background and it made me even more paranoid that I normally am. This season was the reason why I started the plans on the super awesome Zombie Bunker we’re going to build….just in case of a zombie meltdown.

Despite not liking it as much, it definitely didn’t stop me from watching. I learned the following from Season 2 :
– I hate Carl. That stupid fucking little boy needs to learn to do as he’s told or fucking die. I have no patience for him. And what the hell was up with him PULLING A LOADED GUN ON HIS DAD??!!! SHOW SOME RESPECT, BOY!!!

– I hate Lori because she’s a fucking menace. SHE WANTED SHANE DEAD!!! SO WHY IS SHE SO BUTT HURT THAT HER PSEUDO-BOYFRIEND WAS KILLED BY HER HUSBAND?! She can’t be an instigator and tell Rick that Shane’s saying he’s not a good leader and a father so “take care” of him but then go and tell Shane she’s sorry for what’s happened between them and make the man feel like there’s still hope for the two of them being together. You just can’t do that! She needs to get her head straight, man.

– I was happy when Dale died. God….took long enough. He was annoying. That hippy needed to go to a happier place.

– Andrea’s not so bad after all.

So now that we’ve learned that everyone is infected (thanks to the doomed Dr. Jennar from Season One), here’s what I’m wondering.

How could everyone possibly be infected? The only way that would make sense is if everyone is a carrier which would make this possibly a genetic issue OR there’s another way of being infected besides being bitten by a zombie.

So what are your other options?

There’s Contact, Air, Blood, Ingestion, Infection….hm….I can’t think of any others at this time. 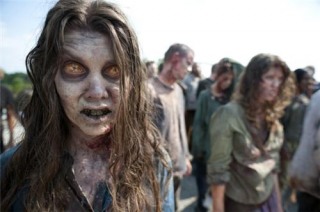 Contact acquired and Bloodborne transmissions could be a possibility since you see the survivors sometimes coming into physical contact with the Walkers. By “contact”, I mean you see them sucker punching the Walkers or grabbing at them when they’re locked in combat. You also see them getting their blood smeared on them as a result of the skirmish or when they’re bashing their brains in.

I’m wondering if coming into contact with the walkers is what’s responsible for everyone being infected. That seems the most possible out of the the Contact / Blood combination because not every one of them got blood on them.

If the disease is spread by contact, that could make sense. Everyone has bacteria living on their skin. In a healthy person with unbroken skin, the presence of these bugs usually won’t get them sick. However, if there is a break in the skin integrity due to a wound or burn to something, these otherwise benign bacteria could potentially overrun the wound and BAM!!!! It caused a nasty infection. If untreated, that infection could rage throughout the entire body.

Maybe the end result of the infection is becoming a zombie?

Mutated bugs like MRSA from one person could be transfered to a healthy person via contact. Scary, right?

Worst case scenario, they overrun your normal, harmless bacteria and now you’re positive for MRSA too. Should you get cut….BAM!!!! Mutated bugs invade the wound. Again, I’m just saying this is worst case scenario. Remember, I am trying to figure out what caused the epidemic in the “Walking Dead” world.

That’s how I see the Contact / Blood routes could work. But both need broken skin in order to work. Sure, there are some parasites that can penetrate the skin without needing an open wound….so possibly, the initial source would be a parasite.

As much as this seems possible, I’m not exactly buying Contact and Blood because the guards in the one of the last episodes showed no signs of scratches, marks or otherwise broken skin. That leads me to the other routes.

Anyone remember the scare caused by the H1N1 / SARS virus? Or when anthrax was being mailed?

Lots of bad diseases are spread by air. A sneeze is nothing more than a butt ton of crap being spewed out at incredible speeds into the air. The worst part is that you can’t even see the particles coming at you! One deep inhaaaaaaaale…..and you just breathed in a disturbingly large amount of whatever just came out of the person expelling it.

I can see this as being a viable possibility. Everyone needs to breathe in order to survive. That’s a given. Maybe the pandemic started as a bacterial or viral infection, possibly transmitted through air. That’s why TB and the flu are so scary. It’s easily transmitted and affects lots of people. Suppose it was a disease carried by air that caused the first case?

This could explain how everyone could be infected and why the guards turned without having a single scratch. If you watched the movie “Contagion”, you know just how fast a disease can spread. So this route is a possibility.

Mmm….I don’t know a lot about genetics so I can’t say much about this.

But here’s what I’m wondering for Season Three. If Shane turned and we’re all infected, could it be possible that it’s from a gene switching on or off Granted, Rick stabbed him with a potentially zombie-blood caked knife but that’s assuming that Contact and Blood are how “turning” happens. Assuming it’s somehow related to some gene ALL humans have and he’s possibly the father of Lori’s baby, what are the odds that her baby would be half human / half zombie?

What would happen then? Would the baby chew its way out of her like in “Aliens”?

And if it was a genetic mutation, then how does it switch on (or off) and declare itself? So confusing. I dunno. Not only does thinking about this make my head hurt because I don’t know a whole lot about it, I’m not so sure this is a possibility.

I just finished reading a book called “Parasite Rex” by Carl Zimmer. It’s a pretty fascinating book about parasites and their relationship with the world since life began.

Parasites in humans isn’t as uncommon as you’d think. Parasites also have a much bigger impact upon their hosts than we’d like to admit. It’s been studied, shown and proven that a parasite can mold its host into what it needs to survive. In fact, some parasites have changed the entire behavior of its host and more or less turned it into a zombie.

Don’t believe me? Read this article and learn something. If you don’t like reading, watch the following clip from BBC on YouTube.

So maybe it’s a fungus that was spread via the air?

As science and parasitology has already proven, this isn’t as far fetched as you’d like to think.

People get tapeworms and other parasites from accidentally swallowing parasites and/or parasite eggs. Shit happens. That’s also how Hepatitis A can be transmitted – fecal to oral….meaning the person handling your food happens to have Hepatitis A did not wash their hands after using the toilet, handled your food with their dirty hands and you ate it. Ta da!! Hepatitis A.

What if the water supply was contaminated and that’s how people got sick? So many horror movies have used contaminated water sources as the cause for why the horrific events occurred.

We’re mostly made of water so I guess this could be possible. We also need to drink water or we’ll die within a few days. Maybe the water sources were contaminated? We saw what happened when a Walker fell into a well on Hershel’s farm and it was decided that the water from the well is no longer safe to drink.

As you can see, I am nowhere closer to figuring out how the outbreak began and I wish they would address it.

I think I should stop thinking about this now. I’m only going to drive myself nuts trying to figure out why the “Walking Dead” world went to Hell in a handbasket and drive Clyde crazy too.

But here’s what I do know. Should something like this really occur, people who work in the hospital or who happens to be in the hospital most likely will be hit first since that’s where sick people go – the Emergency Room. Yay for being a nurse….

In addition to shedding some light on how the Walkers came to be, I hope they tell us what happened to the father and son Rick met in Season One and how they’re doing. I also hope they address the loose end otherwise known as Daryl’s brother, Merle.