Touted as “the ultimate Disney fan experience,” D23 2009 really delivered this year and was undeniably overwhelming but a fantastic experience for fans and Disney enthusiasts alike. 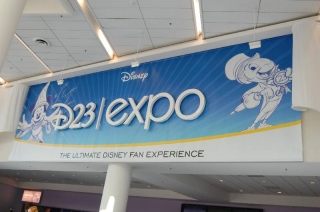 Touted as “the ultimate Disney fan experience,” D23 2009 really delivered this year in Anaheim California. While the convention floors can be covered in a day or two, the whole experience was still undeniably overwhelming and a fantastic experience for fans and Disney enthusiasts alike.

Are you a Disney parks fanatic? The Walt Disney Parks and Resorts area transported you to a different world with models of upcoming park areas (including the Cars themed area coming to Disney’s California Adventure) and new innovations. Imagineering showcased special animatronics: one could even spot guests who were smiling in a crowd and respond to certain words.

How about television shows? The ABC House Screening Room showed special full-episode sneak peeks of upcoming shows Eastwick, FlashForward, The Middle and Modern Family. LOST fans got to check out various props from the movie, sign up for LOST University and even get autographs from special guests!

Collectibles? The Collectors’ Forum was the perfect place to find all those rare Disney collectibles. The D23 Expo Live Auction offered some real one-of-a-kind Disney items and experiences.

That’s just a small sampling of what was in store for excited Disney convention “ears.”

Panels panels panels:
We were able to attend a number of panels on Saturday and Sunday: The Princess and the Frog, Sleeping Beauty, and The Future of Pixar and Walt Disney Animation, and the Toy Story 3 Presentation.

As with any convention, there were lines to the most popular panels, and some of the panels had such secret info they required temporary confiscation of all electronic recording devices. That’s right, a few thousand people checking in their gear and the chaos that ensues afterwards. For as many people as there were, the procedure really wasn’t that bad. Of course, it’s definitely something the D23 crew could look into making more efficient for 2010.

The Floor:
Fears of Comic-Con elbow-to-elbow crowds subsided upon entering the Anaheim Convention Center. The place was huge and the crowds manageable.

Several floors offered all sorts of hidden gems. Disney Consumer Products had an especially significant presence showcasing everything from Disney toys to Disney paint to Disney wedding/princess type dresses to Disney carpeting (you heard me right). Other special interests were toys and high-end collectible such as eFX Inc.’s limited-edition collectible prop replicas. Our friends MINDstyle was also their showcasing their amazing Disney Stitch: The Experiment 626 Project custom art tour for those who’ve missed out at this year’s SDCC or even the FX Show.

Special guest stars were available for autographs and photos – it really was a place where Disney fans could geek out and partake in the fandom by personally interact with stars, talents, imaginers and animators after the panels and at designated autograph signing times.

Disney’s D23 Expo 09 was definitely a treat for any Disney fan. Whether you’re a parks, movies, or TV fan, there was probably something there for you.