Michael speaks to us about Taco Bell, what he’s been doing to achieve his dream and how the US government has failed to assist him in any way.

It all started with a taco party, but what came after will change the face of the nation. His name is Michael Ian Black. You might know him from MTV’s “The State”, “Reaper”, “Run, Fat Boy Run”, or even his Robot Chicken appearances as the voice of Mo-Larr Eternian Dentist. What you might not know about his is that he loves Taco Bell.

Ever since his Taco Party essay reading went viral on Funny Or Die, Michael has been on a quest to use his fame and his 1.6 million Twitter followers to help him achieve the holy grail of spokesman positions. His quest? To become the new face of Taco Bell!

Michael took some time out of his busy schedule this week to talk to YBMW about Taco Bell, what he’s been doing to achieve his dream and how the US government has failed to assist him in any way.

YBMW: Why do you want to be the face of Taco Bell?

MIB: I’ve always said that Taco Bell is the best restaurant dollar for dollar. I just like eating their food. Also, I’m unemployed and I need the work. Is taco Bell looking for a spokesman? I don’t know. Do they know who I am? I think they do now. I have talents and I have Twitter so I decided to do something useful with my time. If it comes down to a choice between doing this and napping. I choose this… And then afterwards I’ll choose napping.

YBMW: If chosen to be the new face of taco bell, What will you do to bring about the Demolition Man style domination of the taco bell brand?

I feel, conservatively that this would increase Taco Bell’s sales 50,000 fold.

MIB: Yeah, I don’t want to over sell it.

YBMW: Gordita vs Chalupa? What are your thoughts?

MIB: I would have to go with the Chalupa. The Gordita is big and you can only eat one of them. When I go to taco bell, I like to get multiples. I can eat two Chalupas instead of just one Gordita.

YBMW: Charlie Sheen has Tiger’s Blood, what does Michael Ian black have?

MIB: I have Dr Pepper Blood.

YBMW: What would you do to defend taco bell from the recent rumors that there isn’t much actual meat in their meat?

MIB: I’ve actually addressed this in a twitter message before it became a big deal. The meat in taco bell is made from Magic.

YBMW: What kind of tacos do they serve in heaven?

In heaven, the guacamole is always fresh and never has any brown spots.

YBMW: How do you feel about the president’s lack of assistance in your quest to be the face of taco bell?

MIB: It is very upsetting. And it isn’t just Barack Obama, it is also my Congressman Jim Himes. I supported Barack Obama and this is the kind of thing that is completely in his purview. He has the authority to make it happen. Am I on the top of his list right now? I don’t know, but there’s no excuse when it comes to Jim Himes. I supported him twice. I didn’t even ask him to make it happen, just to follow up with The President and get back to me. How much else could he have on his plate? You would not believe how big the pot holes are in my town after this year’s snow storms, so he can’t be all that busy. 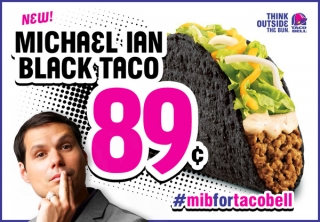 YBMW: What are the global geopolitical and economic consequences if Taco Bell fails to choose you as the face of taco bell?

MIB: My being the spokesman for Taco Bell could definitely have a stabilizing effect, I’m talking specifically about what is happening in North Africa. If they didn’t choose me, I’m not sure it would do damage. Things can’t really get much worse.

YBMW: If Taco Bell and The President continue to snub you, will they still be invited to your taco party?

MIB: If Taco Bell doesn’t choose me as their spokesperson, will I stop going there? No, I like Taco Bell and I’ll keep going there for the food. If the President doesn’t respond and help me will I support him less? Yes.

YBMW: They say that life is like a taco, please explain.

MIB: Who says that?

MIB: I don’t think that’s true. I think you just made up a saying and you want me to explain it, but I’ll give it a try. Life is like a taco, it can be crunchy and filled with good stuff, but it’s usually pretty cheesy.

YBMW: Moving beyond tacos, will there be more episodes of Backwash coming out soon?

MIB: I’m really not sure. All 13 episodes that have been filmed are available online, but there’s been no word on if there will be any more.

YBMW: In a world where more and more celebrities are now having the action hero roles that they’ve portrayed immortalized in action figure form, how does it feel to have your first action figure be Robot Chicken’s Mo-Larr The Eternian Dentist?

MIB: I’m extremely proud to be a tribute to the dental health profession. There are lots of actors and actresses that are super heroes, but they all have dental health professionals to thank for helping them get there. Almost every celebrity has had their teeth fixed, but it isn’t the type of thing they like to talk about. So, I think that having my own action figure is very cool, but it is an honor to have my figure be a dentist.

YBMW: What would you say to someone who isn’t familiar with you to make them give “My Custom Van” a shot.

MIB: First, anyone who likes tacos will enjoy this book because it has, what I think is the best essay ever written about tacos. If they don’t like tacos, there are several other essays that they might enjoy on squirrels, me painting my dick yellow, and several letters to the first girl I fingered. So, if they don’t like one topic, there are 49 others that they might enjoy.

YBMW: Other than becoming the face of Taco Bell, what other projects are you working on?

MIB: Absolutely nothing, I’m unemployed. do you think I’d be doing this if I had a job? I’m just like everyone else in this economy, I need the work. So, no, I’d just be eating at taco bell not trying to do this.

Finally, just moments ago, The band Bowling For Soup just released their theme song for the MIB Taco Bell movement.