“Ghost Adventures'” Zak Bagans, Nick Groff and Aaron Goodwin sits down with us for a crash course in ghost busting at their very first Comic-Con! 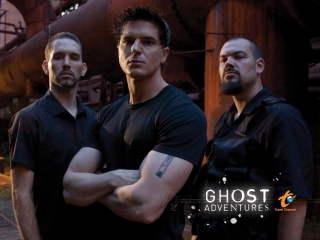 I’ve never met real life ghost hunters. The closest I ever got to people who are even remotely in this line of work happened to be on the big screen a la “Ghost Busters.” Needless to say, I wasn’t quite sure what to expect from Zak Bagans, Nick Groff and Aaron Goodwin. I hoped they would be friendly.

I was really excited to meet them because, hello, how often do you get to meet people who track down ghosts on the regular? To express my excitement, I made sure to dress appropriately for the occasion. I wore my blinged out skull tank top. Sweet.

And then I came face to face with the boys of Ghost Adventures. At first glance, if I were a ghost, I’d run the hell away screaming at the top of my lungs. First of all, I’m no shorty but these guys are MASSIVE. Aaron looks like he could eat me for a snack. Zak was rather intimidating in his all black gear, massive dark sunglasses and multiple tattoos playing peek-a-boo with me. The only one that looked friendly from the get go is Nick.

As soon as I opened my mouth to say hello, I realized that they aren’t as formidable as they first appeared to be. They’re very friendly and I had a great chat with them. Seeing as how we’re at Comic Con, I asked them if they had any favorite comics when they were growing up. Aaron liked Valliant, Nick is partial to Frank Miller and Zak gravitated towards Ghost Rider. Hm….interesting, indeed. Could that be a coincidence or a possible heads up on what his future would be like? Things that make you go “Hm….”

One of the first things we established was their status as Comic Con virgins. How cute! I then had to know – which is scarier? The mind numbing awesomeness that is Comic Con or flushing out ghosts? Zak said Comic Con. Nick and Aaron concurred on ghost seeking as the scarier of the two.

My next question was how did they know they’d be good at this? Did they always know they could see ghosts? I started wondering if this is something only a select elite could do but before I could ask, Nick read my mind and said he believes people are born with the latent ability to see and sense spirits. It’s a skill that has to be used regularly, like a computer. The more you use it, the more intuitive doing it becomes and next thing you know, you’ve honed your skills. I found myself nodding my head because, damn, he made total sense!

So how exactly did Ghost Adventures come about? None of them had any idea this would turn into a show because all three of them agreed that they’re not actors. In the beginning, their only goal was to simply prove the existence of ghosts to themselves so once upon a time, Nick met Zak in Vegas. They discovered a shared intrigue of the paranormal, hit it off, decided to call up Aaron and thus the idea of Ghost Adventures was born.

Apparently not everything that happens in Vegas stays in Vegas. This is one of those things I’m happy to see make it out of Sin City.

Throughout the course of their time working together, they discovered that all three of them are what they call “sensitive.” When I asked them to explain what that means, they said they can feel and sense spirits. Case in point, they were at the Coronado Hotel and all three felt the now familiar tingle. Before they could really do anything, a water glass shot out of the hands of a lady in the room and flew about 12 feet.

Then there are times when they rely on sensitive equipment to confirm what they’re feeling. One such piece of equipment is called the PSB 7 aka “the spirit box.” This black rectangular box scans through radios stations.

My confusion must’ve been pretty clear on my face because Zak went on to give me story on how it works. They were scanning the frequencies one day when they captured the voice of woman saying “Can I ask you a question?” Sounds normal enough….that is, until you factor in the part where her question was caught jumping over 17 channels. They asked her what her name was and the tearful voice replied “Alicia.”

I had chills sliding down my back when they were telling me this and I have monster massive goosebumps on my arms right now as I’m typing this out on my laptop.

It turns out that this happy trio are known and wanted. Zak very helpfully said ” You know. Like in those old Western movies with those wanted posters. I’m ‘Zak the Kid’, Nick is ‘Nick James’ and Aaron is ‘Aaron Holiday’. The ghosts ask for us by name.”

It’s true. The boys proceed to tell me that there have been times where they enter a town and the residents of the location will know who they are because the spirits told them. In fact, the spirits are very specific and ask for these particular guys.

Now this is interesting. Why on Earth and this side of Heaven would ghosts do this and this frequently? The only answer Zak, Aaron and Nick have for me is “because we give them closure by letting them be heard.” Their theory (and I think it’s a good one) is that some of the ones who stay behind are results of a sudden death. They’re unprepared to go to where they’re supposed to go because they initially don’t know they’re dead. One such place where this happened was when they went to visit the Remington Arms Factory. There was a massive explosion there which resulted in some of these souls caught in a strange limbo.

In fact, according to this ghost seeking trio, the movie “Ghost” with Patrick Swayze isn’t all that far fetched and is actually a pretty accurate depiction.

However, as I was about to find out, it isn’t always rainbows and lights at the end of the tunnel when dealing with the paranormal. In fact, there are times when they consider themselves Demon Hunters instead of three guys seeking ghosts. All three have had marriages broken as a result of their work. Aaron and Zak have been physically assaulted by an unfriendly spirit which ultimately drew their blood. This event was said to be a mocking of the trinity and a very real battle between good and evil. Nick was the only one to emerge unscathed from that particular adventure. Spirits have followed them home and some of them took to violently redecorating their homes.

While they welcome ghosts who have lost their way with open arms, do their best to help them come to terms and help them on their way, the flip side of this is as dark as they come. Zak describes an addition to the dark energy and likens it to flirting with the danger and the dark side. Sometimes, the dark wells up within him and it becomes a battle to remain in control. He also sees them as a modern version of Van Hellsing.

Sounds intense…and frightening. Naturally this made me curious as to how they protect themselves. Going in to each situation is different because it’s almost like they’re going in blind. They do the best they can and they all watch each other’s backs. Zak performs a cleansing on himself whenever he feels he’s been in too close to an evil spirit. He also mentioned a tattoo on his body with an emphasis on protection. Nick will erect shields and barriers within his mind as he mentally shuts the door between himself and the adventure he just had.

So now I wanted to know how this has affected them and their view on the paranormal. They said that everything has changed. Where before there was only curiosity, it has now evolved into a genuine respect as all are 150% believers.

They no longer take paranormal matters lightly because they have proven its existence to themselves repeatedly.

They also treat all spirits they encounter with immense respect. Life has shifted for them and with that shift, their perspective on life has also changed. For them, this is their passion and they view it as an honor to do what they do.

Perhaps this is why the denizens of the spirit world as for these three by name.

Before we said good bye, I had to know one more thing. Where do bonafide ghost hunters go for vacation?

Uh huh. But my favorite answer of all?

I love how they all have such an awesome sense of humor. Count me in as their newest official fangirl.

Catch the new season of Ghost Adventures only on the Travel Channel in September… if you dare!!