Ginny McQueen’s more than just your average cosplay model. She’s the PR manager for Cosplay.com and an actress with up upcoming Star Trek Webseries set to air this summer… And, She’s May’s GOTM

We’ve had some great Girls of the Month so far this year and they just keep getting hotter and hotter as the year This month we’ve got Ginny McQueen. She’s more than just your average cosplay model. She’s the PR manager for Cosplay.com and an actress with up upcoming Star Trek Webseries set to air this summer. 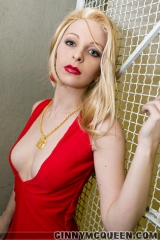 What were your favorite cartoons growing up?
Teenage Mutant Ninja Turtles and Batman The Animated Series were probably my favorites.

What cartoons do you like to watch now?
Venture Bros and Archer are the two I’m currently in love with.

Do you collect toys now?
I have a nice collection of Ayanami Rei figures from Evangelion. I also have lots of dinosaurs and just random things all over my desk.

What was your favorite video game as a kid?
I loved original Tetris on my old Gameboy. Mario Bros and the TMNT game on Nintendo were favorites as well.

What games do you like to play now?
The last game I finished was Angry Birds. (LOL!) I love playing Rock Band. And I recently played through Final Fantasy 7 again since I hadn’t played it for so many years. It’s still good!

What is your favorite Anime?
Neon Genesis Evangelion is my #1 favorite. I also love Miyazaki films like Totoro and Spirited Away. Sailor Moon will always be one of my favorites as well.

How did you get into Cosplay?
A couple friends mentioned they were going to this convention thing and that lots of people dressed up as characters. I went as Minnie May from Gunsmith Cats because I was short and had hair like hers. After that first convention (Otakon ’98) I was hooked and just kept making things. 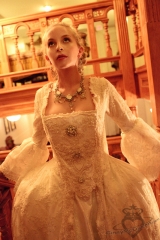 What is your favorite Cosplay that you’ve made? I’m probably most proud of my Madame de Pompadour dress from Doctor Who. It was the most expensive thing I’ve made (and probably will ever make) and I was really happy about how it came out. I had never made a period dress like that and I just jumped into doing it. There were so many ways it could have gone wrong but for once I lucked out and didn’t mess it up too much.

What is your ultimate fantasy Cosplay and why?
I’m still about 25% into making Samantha from Vagrant Story. It’s an amazing game and story and one day I’ll finish the costume!

What is the coolest opportunity that Cosplay has opened up for you in your life?
Definitely my job and the traveling I get to do. I’ve gone to so many places I never thought I would be able to visit. Who thinks that dressing up as a cartoon character would allow them to visit Moscow? It’s crazy! And it’s so amazing because all of the geeks all around the world are the same. We may speak different languages, but we are all the same in that geek way and it’s awesome to be able to meet so many other people who are just as weird as me. Well, maybe not as weird as me. I’m pretty damn weird.

What did you want to be when you were growing up?
I suffered from having a parent that told me I was so great that I could do anything I wanted and never pushed me in any one direction. Which made me have absolutely no direction at all! I probably should have been told what to do! I have never been shy when it comes to being on stage and being silly, so I gravitated towards things like being in a punk band and then majoring in theatre in college.

Favorite Food?
I love food. I eat Chinese food probably 3 times a week. I love ramen and udon when I’m in Japan. And the food in Germany is amazingly good. I also drink sugar water all day long. Mt. Dew and Kool-Aid. I must have the most sugary, delicious blood.

If you could have any Superpower, what would it be and why?
Immortality. I would absolutely volunteer to be a vampire if it meant I’d live forever and never age.

What do you look for in a guy?
I look for my husband I guess!

What is the strangest come on you’ve ever gotten from someone while in your Cosplay?
Most of the time when guys at conventions try to talk to you, they just come off as really rude or socially inept. But that’s only when I’m in costume for some reason. Guys are much more articulate with you when you are in a jeans and t-shirt. 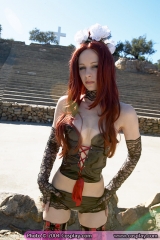 Do you have any advice for the cool, yet geeky guys out there that just can’t seem to find a woman who appreciates their love of Anime, Comics or Toys? Don’t settle! It’s hard to find girls who aren’t completely insane, and that’s not just in the geek community. All women are crazy, so you have to find ones that are the right kind of crazy. They are out there, but hard to find sometimes. Definitely be social and go out to conventions and whatnot. Just always be yourself. In the long run you are not going to want to be around someone who you can’t be yourself around. And one day you’ll find some girl who will get you.

What projects do you have coming up and where can people go to see you online or at live events?
Right now I’m working with some people here in Las Vegas on a Star Trek web series. It should be premiering this summer, so I hope people will like it. It’s completely fan made and self-funded so we will need donations to keep it going if people like it! http://www.startreksecretvoyage.com

I’ll also be in the 2012 Cosplay for a Cause calendar which will be donating 100% of the proceeds to the Japan Red Cross.