Games, cosplay, anime and … Sonic the Hedgehog? Hezachan loves them all as she is YBMW’s GOTM!

Shes’ a mild-mannered receptionist by day. But, when the sun goes down, Heather not only transforms into the awesome Cosplay Model HezaChan, and our July, 2011 Girl Of The Month. 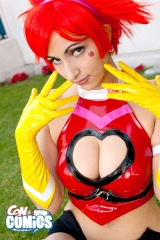 YBMW: What were your favorite cartoons growing up?
hezachan: I loved to watch Adventures of Sonic the Hedgehog when I was in elementary school, and I was most fond of the Disney Afternoon — specially Goof Troop and Gargoyles! When I got into middle school, I was getting heavy into anime and would watch Sailor Moon and DBZ on Toonami.

What cartoons do you like to watch now?
Since I don’t have cable television, I don’t get to watch many new cartoons coming out in America. But I do try to keep up on certain anime series. I just finished up watching Panty and Stocking a few months ago, and I’m finally finishing up Lucky Star and Bakemonogatari.

What toys did you play with when you were a kid?
Barbies and My Little Pony were about the only girly toys I’d play with, but growing up I was way more fond of “boys toys”. I have a pretty decent collection of Jurassic Park dinosaurs (Bull T-rex FTW), and I had a few Ninja Turtles, Street Sharks, and Biker Mice from Mars.

Do you collect toys now?
Sure do! Currently I’ve been collection new Pokemon merch, but mainly Oshawott. I also collect anime figures from series that I love. I should be having a Stocking figure coming my way in a few weeks!

What was your favorite video game as a kid?
Sonic the Hedgehog! I was OBSESSED! Basically, Sonic was my hero and I played almost every damned Sonic game I could get my hands on, including Dr. Robotnik’s Mean Bean Machine. However, I started to fall out of the Sonic games after Sonic Adventure 2 came out. They haven’t made any games that have captured the essence of the old Sonic since then, however, I am looking forward to Sonic Generations coming out! 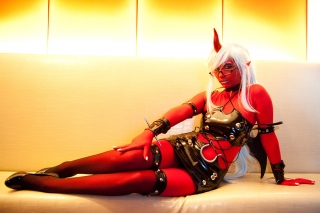 What games do you like to play now?
I mainly play Pokemon and fighting games such as MvC3, and Super Street Fighter. I’m no where near as good as the pros in those fighting games though. Haha!

What is your favorite Anime?
This is a hard question actually, because I pretty much love two animes equally, but if I had to pick one it’d be Saber Marionette J. This was my first anime that I had watched that had not been shown on TV way back in middle school. I’m SO glad it wasn’t a dud.

How did you get into Cosplay?
It all started when I my friend invited me to go to my first anime convention ever back in 2001. I didn’t know what “cosplay” was. I figured if they dressed up at Sci-fi conventions, they probably dress up at anime cons as well. I went as my favorite character at the time, Lime from Saber Marionette J. I figured if we weren’t allowed to be in costume I’d just change out. But, that wasn’t the case and I met tons of other awesome people with great costumes. Then the addiction followed.

What is your favorite Cosplay that you’ve made?
Currently, I’d have to say my Stocking cosplay is my favorite. I don’t know exactly why… I just really love the colors and how everything turned out better than I had expected. It was my first time working with bridal satin, and it wasn’t as hard as I thought it would have been!

What is your ultimate fantasy Cosplay and why?
Noel’s golden angel outfit from the comic “Sky Doll”. Damn that outfit is pretty!

Do you think you’ll ever make it?
If I ever build up the funds and the time to make it, sure!

What is the coolest opportunity that Cosplay has opened up for you in your life?
I’d have to say going to Mexico was the coolest opportunity. I would say Japan, but I was going with my fiance anyway for Tokyo Game Show. I met a lot of cool people, but that trip was planned. The wonderful people at ConComics in Guadalajara, Mexico had invited to be their special cosplay guest and masquerade judge! I have always dreamed of going to conventions around the world, and the trip made that dream come true. I met tons of wonderful, nice people who were so fun to be around. I made awesome new friends as well! I would love to return one day and see everyone again.

What have been some of the highest and lowest experiences that you’ve had associated with your celebrity status?
It’s been pretty awesome lately. Just over the past 2 years things have really opened up for me. I’ve gotten in a few magazines, and even got to write a tutorial for one of them! It’s a really awesome feeling when people seem to enjoy your work. As for lowest experiences… I can’t really think of any. 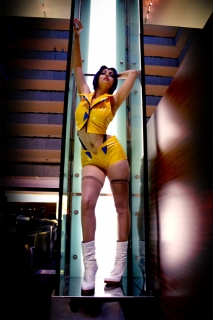 What did you want to be when you were growing up?
An animator, zoo keeper or a veterinarian. Anything that delt with animals or artwork basically~

If you could have any Superpower, what would it be and why?
I would love to have the power of invisibility simply so I could freak people out by making them think their place is haunted. Hehehehe~

What do you look for in a guy?
Smart, Nerdy, Funny and Nice. However, I’m engaged and not currently looking :B

What is the strangest come on you’ve ever gotten from someone while in your Cosplay?
I had this dude at Wizard World Comic Con Chicago bend down into my crotch and say “Nice shave job”. Smooth; real smooth.

Do you have any advice for the cool, yet geeky guys out there that just can’t seem to find a woman who appreciates their love of Anime, Comics or Toys?
Keep looking! They are out there. Don’t be shy to approach, you may never know what you have in common! For instance, if she’s in cosplay and you recognize the character, that’s a great starting point for a nice conversation. Talk about that character/series, and you can branch off into other things! Also, the internet can be your friend, that’s how I met my fiance!

What projects do you have coming up and where can people go to see you online or at live events?
I’m planning on making a few more costumes this year, but that all depends on budget. I’m hoping to finish the “Love Slinger” Sheryl Nome from the 2nd Macross Frontier Movie, and Juri from Super Street Fighter 4. I’m very spontaneous and normally I don’t schedule my convention plans a head of time. However, if you follow me on my Twitter or Facebook page I will announce it there. You can also visit my website.