YBMW Gets In Big Trouble In Little China At The 25th Anniversary Screening In L.A.

It’s easily one of the best American kung fu comedies. A true classic action / comedy and to other a movie they vaguely remember the box art for.

For it’s 25th anniversary the Egyptian theater screened of a brand new 35mm print of Big Trouble in Little China. To some a true classic action / comedy and to other a movie they vaguely remember the box art for. The screening ended with a rare and very welcome Conversation then Q&A with director John Carpenter.

If you haven’t seen this movie then stop reading this article and go watch it. I’ll wait…

…are you finished? Oh sorry, yeah that part’s awesome! Agreed Kim Cattrall was super cute! Just let me know when it’s over. For all you other readers waiting for this article to continue I give you the incredible music video made for the film.

So it’s been 25 years since the release of this John Carpenter classic and after watching in on the big screen I have to say it’s still pretty awesome!

Back in July of ‘86 this movie sadly tanked. The studio didn’t get what they wanted, which was an Indiana Joens-esqe film, and so their marketing push truly didn’t find an audience.

It opened to lukewarm reviews, Ebert said “special effects don’t mean much unless we care about the characters.” I agree with Ebert on that note but disagree that you don’t care aboiut the leads in Big Trouble. It’s a wacky collection of characters that you want to see on this adventure in Chinatowns underground catacombs.

It’s one of those films that was given life by home video and weekend afternoon screenings on local TV stations. It would end up stumbling into view of kids who didn’t know anything about it and were happily surprised. This film is an obvious send up of westerns and kung fu films alike and I really think it stands the test of time as a great action comedy.

From a script rewritten by W. D. Richter the man behind Buckaroo Bonsai it was handed to John Carpenter as a studio assignment. He was more than happy to make this chop socky send up. The original script took place in the late 1800’s in San Francisco and was at it’s core the same film. Richter updated the script and brought it a bit more south to L. A.’s chinatown. Carpenter has said that once he received the script and decided to move forward with it he wanted to make Jack Burton more incompetent than he was originally. The gag being that every time he tries to do something heroic his Chinese sidekick has already taken care of it. Carper has also said that ever since he saw a screening of The Five Deadly Venoms (one of my favorite Cheh Chang films ever!) he was hooked on kung fu movies and wanted to make something playing with that mythology. 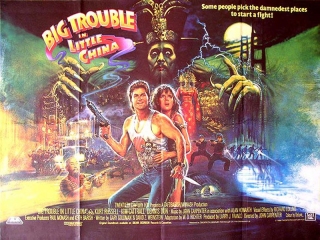 Once in production the cast had a ball according to Carpenter. He knew in the back of his mind this may not be the film the studio truly wanted but felt he was making the film he wanted to make. This movie is littered with amazing set pieces and special effects. The visual effects producer was Richard Edlund (Raiders of the Lost Ark, The Original Star Wars trilogy). The film for it’s time popped with visual imagery and imagination. Taking from the classic kung fu movies this film has it all, a man that shoots electricity out of his hands, Chinese wizard battles, subterranean creatures, epic throne rooms under Chinatown, and hot chicks levitating on the burning blade! I know I’m missing shit but you get the picture, lots of effects and with Edlund involved they look pretty badass.

Kurt Russell and John Carpenter worked pretty damn well with each other. With Carpenter, Russell created one of his best-remembered characters Snake Pliskin in Escape from New York. This film is no exception, anyone that’s seen it remembers Jack Burton and his track driver philosophizing, “Just remember what ol’ Jack Burton does when the earth quakes, and the poison arrows fall from the sky, and the pillars of Heaven shake. Yeah, Jack Burton just looks that big ol’ storm right square in the eye and he says, “Give me your best shot, pal. I can take it.” His Jack Burton is blowhard that generally ends up on his ass and occasionally saves the day. The studio was very upset that he wasn’t the generic hero type and added the scene at the head of the film where Egg Shen tells a lawyer about Jacks bravery.

In mildly researching things about Big Trouble after the screening, I found out there was a Commodore 64 video game released! It looks like a cheap movie tie in that just uses the coding from the old game Kung Fu. Under that it IS a cheap movie tie in that uses the code from the old Kung Fu game. It has a few more options but like many games based on films I’m sure it was a rush job. Below you can see a speedrun I tracked down on youtube. I’ll admit it does look better than Kung Fu (the game) but I have a gut feeling the controls are ass and it’s repetitive nature will melt your brain meats. I’d like to say that the idea of a game for this film is awesome! One can only dream of Rockstar giving this film the treatment they gave The Warriors, a truly underrated video game and one that is easily in my top ten.

This film is obvious inspiration for Mortal Kombat and many other video games. John Carpenter seemed quite proud of that fact during the Q & A Session as he is a self proclaimed gamer. While discussing the film he recommended the games Borderlands Dead Space 2, and was a consultant on F.E.A.R. 3 (the man has good taste.) He debunked many rumors surrounding the film such as the weirder on that the script was originally the sequel to Buckaroo Bansai. Carpenter said that he doubted it since Richter didn’t write the original screenplay and then said he “didn’t get Buckaroo Bansai.”

The obvious question on all our lips was if he was ever planning on a sequel and we all knew the truth but one daring Fanboy asked it anyway.

Carpenter looked at the man slightly confused and with pitch perfect timing said “No, it tanked man. Nobody wants to see it.” While my 12 year old heart cracks a little knowing that it is the truth. In 1986 the film cost 25million and raked in a whopping 11 mil at the box office. This diluted Carpenter on making films in the studio system and he went back to more independent endeavors.

This film has flaws and no doubt you’ll notice some but it’s got a charm contemporary action comedies seem to be missing as of late. It’s easily one of the best American kung fu comedies. Between Jack Burton’s cocky bravado with no follow up and every mystic Chinese cliché in the book, this film doesn’t let up once the ride starts.