We’ve had some pretty amazing GOTMs in the past, but none as real as the one and only Realistikk. 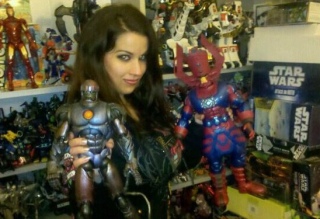 We’ve had some pretty amazing Girls of The Months (GOTMs) in the past, but none as real as the GOTM you’re about to be meet. We’re proud to present to you our newest GOTM, Mandy, otherwise known as Realistikk. When Realistikk isn’t spitting ill flows on the mic or working on new tracks, you can find Mandy on YouTube entertaining the geek community doing action figure and superhero costume reviews. Her love of Transformers, Marvel and DC superheroes and all things that you thought repelled women officially makes her not just our Girl of the Month, but Geek of the Month. Yes, that’s right folks, 100% GCG certified and geek approved!

What were your favorite cartoons growing up and why?
Transformers (all the different series),The Real Ghostbusters, G.I.Joe, He-Man and the Masters of the Universe, Tom and Jerry, Duck Tales, Tiny Toons, pretty much everything that was on and whatever we had taped. Cartoons were always my favorite thing on TV. I wanted to be a cartoonist when I was little and used to watch them and draw the characters while watching.

Do you watch any cartoons still?
Always! Currently I been watching Avengers: Earth’s Mightiest Heroes and I also watch DVDs of Transformers, G.I. Joe, Wolverine and the X-Men, The Simpsons, Family Guy, Aqua Teen Hunger Force, a ton of stuff…

What are you currently reading?
I recently finished the Dark Avengers trade (I’m pretty far behind in comics!) and have been checking out some of the Brightest Day issues.

Do you have a favorite comic, storyline or writer/artist?
I really liked the Blackest Night storyline a lot!

What toys did you play with when you were a kid?
I used to steal my older brother’s toys,and had some of my own…Transformers,Marvel figures, LEGOss, TMNTs, Ghostbusters, M.U.S.C.L.E., Matchbox/Hot Wheels cars, Star Wars, MOTU, G.I.Joe, Wrestling figures, etc.

I never was into any dolls are anything like that, I was pretty much a tomboy.

Was there ever a toy you really wanted as a kid, but was never able to get?
I used to want every G1 Transformer that they made, specifically all the Decepticons. I used to stare at those brochures with the checklists they came with and wish I could check off the entire list. I think I’m almost there now :) 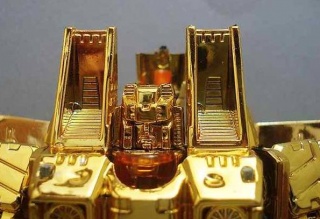 Have you always been an action figure collector, or is it something you got into when you were an adult?
I never stopped liking figures, but I was afraid to start collecting, because I knew I wouldn’t be able to stop… But around 2008 or so, I bought G1 Skywarp on Ebay and haven’t stopped since then.

What toy/action figure would you consider your “holy grail?”
Oh man, well, I always wanted to complete my Starscream collection, and there are a few that I don’t have, like the SCF PVC Ghost Starscream, among others, like one of the Lucky Draw Starscreams. I also always wanted one of the all gold chromed-out KO Starscreams.

What action figure needs to get made that hasn’t yet?
They need to make Masterpiece Triple changers like Octane and Blitzwing. Also, a MP Overlord and a MP Swoop!

If you had to get rid of all your toys except one, which would you keep and why?
This is always a hard one for me. But I’d have to say my Masterpiece Ghost Starscream, not only does he look cool,but I can transform him, so it’s technically like having two toys.

Imagine you’re on a date and you go back to the guy’s apartment because he wanted to show you his collection. What toy(s) will help either land or kill his chances for a second date?
Any Transformers/Marvel/DC/Spawn stuff would be cool! Also I love checking out setups in Detolf cases and dope displays (acba!)

Do you collect anything else?
Well, I’ve been buying a lot of costumes for cons lately, so I’ve started a collection of official Marvel/DC character costumes and also accessories and clothing pieces that I use to make my own cosplay outfits. 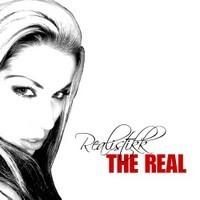 What or who inspired you into becoming a rapper?
Watching MTV & BET growing up and seeing all these artists and checking out all these shows just really made me want to try it myself. I pushed myself to get on stage one night on an open mic set, and I’ve been hooked ever since.

Where do you draw your inspiration for your lyrics from?
Cartoons, comics, and movies have always inspired me. Pretty much just life in general. I love to write about everything that’s going on in my life, and have tons of songs written about all kinds of topics. It’s a kind of therapy for me just to write my feelings out.

What’s the story behind your MC name?
I came up with this name because I always keep it real in my songs and talk about real life situations, stories and things I love.

Being a studio gangsta, or talking about things just to go along with the crowd-that’s not “realistikk.”

How long have you been rapping?
I been writing songs since i was a kid, but really considered myself a dope emcee around 2006 when i started putting out more quality music.

What made you want to rap about toys, comics and other geeky things? Are they personal tributes to things you love or are they part of an album you’re working on?
They are definitely tributes to things I love. I have such a passion for the artwork and characters that it really inspires me to keep doing music. I originally did some of these songs just for Youtube videos, but I ended up putting up my Transformer tribute and my Killer Instinct tribute on my latest album, Stardust, which has a whole array of topics on it.

What projects do you have coming up and where can people go to see you online or live?
I just completed my latest album, Stardust, which will be available on Itunes in April or May 2011. I already have another album, “The Real,” on Itunes that you can check out now, and I do shows often in different areas. For the latest news people can follow me on Twitter @Realistikk and subscribe to my Youtube channel for music, toy reviews and convention coverage!

These are the channel where I do raps, reviews and random videos on anything I love… Transformers, Marvel, DC, and more. Coming soon: Starscream rap!