So you know that Wolverine made his first appearance in The Incredible Hulk #181, but do you know these facts?

1). Histoire de M. Vieux Bois, also known as Les amours de Mr. Vieux Bois or simply Monsieur Vieuxbois, and The Adventures of Obadiah Oldbuck in English, is a 19th-century publication often credited as the first modern comic book. Written and illustrated by Rodolphe Töpffer, a Swiss caricaturist, its format of sequential pictures and captions according to comics theorists Scott McCloud, represents one of the first interdependent combinations of images and words as well as its usage of the now common panel borders. Obadiah Oldbuck was a comical tale about a gentleman who would repeatedly attempt suicide after being rejected by his lady love. 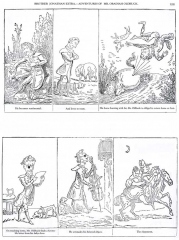 2). The real success of the comic book medium did not begin until 1937 with the publication of Detective Comics, followed by Action Comics a year later, which introduced Superman, the first comic book superhero. Of course, super powers and super caricaturists were nothing new. Mandrake the Magician who could control people hypnotically debuted four years prior to Superman in 1934, while ancient myths, gods and deities were some of the earlier forms of superheroes no different than mutants or some geeky kid bitten by a radioactive spider. 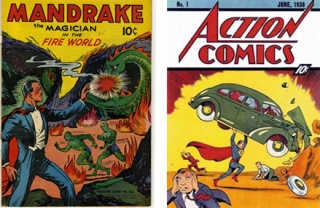 In his editorial, “A National Disgrace,” the literary critic publically assaulted the medium and accused parents of being “guilty of criminal negligence” for allowing their children to read comic books.

North gained tremendous support from concerned parents, churches and schools and his editorial was reprinted in more than forty newspapers and magazines which paved the path for subsequent criticisms and investigations of comic books.

4).In 1946, Ayers Newspaper Directory reported that comic book sales in the United States had out sold traditional books. To concerned parents, libraries and educators, this gave the impression that comic books had become the primary literary form in America. As a way of intervention, fearful and outraged cities such as Chicago, Binghamton and New York began to form watchdog communities to incinerate comic books. Like the Salem’s witch hunt, comic books were gathered and ritually burned. This practice however, was eventually condemned as it promoted authoritarianism and was said to have had negative effects on children who tearfully watched as their beloved comic books burned in the fire. 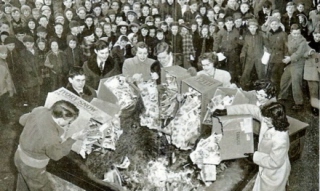 5). On July 20, 2006, a half century removed from when comic books were publically decreed as a profound cultural threat, the United States Postal Service released, DC Comics Super Heroes, the first commemorative stamp pane honoring America’s legendary comic book Super Heroes in recognition for not only their significance as a part of American culture but as a true art form. 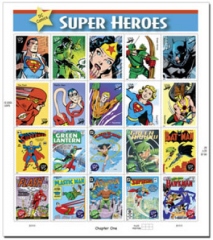 6). Superman, Spider-Man and Batman are the three most popular American superheroes known and beloved worldwide. Their likenesses have been replicated and trans-racialized in almost every country, culture and language, with Superman being the most well-known. However, with the commercial success of Sony’s Spider-Man franchise as well as Warner Bros’ Batman reboot, both Spider-Man and Batman have risen even more in popularity and cross-cultural demand. And while superheroes such as Wolverine, the Fantastic Four, Hulk and Daredevil are mainstays and common American favorites, they are all but barely recognizable anywhere outside the United States. People would sooner recognize Snoopy from The Peanuts than say, Mr. Fantastic from the Fantastic Four. 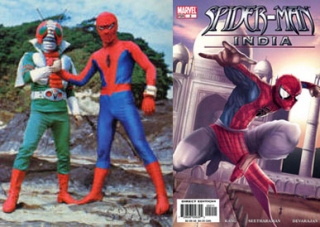 7). Despite the name, comic books, sometimes referred to as “funny books” are not and have not always been “comical.” Truly a modern day myth, the belief that comic books are “funny” represents a common misconception held by many even to this day. According to a recent study by San Diego State University, the source of this confusion is rooted in people’s limited exposure to comic books and greater exposure to the often punch-line friendly comic strips. This complicates matter because comic books and comic strips become synonymously perceived even though the two forms differ fundamentally. Another cause is through the industry’s own self-censorship which led to the Comics Code Authority (CCA) in 1954. This self-censorship became responsible for the campy nature of superheroes and is best exemplified by Adam West’s portrayal of Batman from the hit 1960s television show. This also explains why some of the negative reviews for the 2008 blockbuster, The Dark Knight, had critics complaining that it was “too dark” and “too serious.” Because by golly and gee wiz Batman! Shouldn’t a comic book movie be more light hearted and funny?! 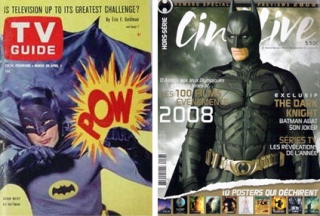 8). In 1986, Art Spiegelman’s two-volume family memoir Maus became the first comic book nominated by The National Book Critics Circle for its annual award in biography as well as receiving a special Pulitzer in 1992. Watchmen (1986) by Alan Moore became the only comic book to be induced in Time’s 2005 list of “the 100 best English-language novels from 1923 to the present.” Meanwhile, Gene Yang’s graphic novel American Born Chinese became a finalist for the 2006 National Book Awards and became the first graphic novel recognized by the National Book Foundation.

9). Comic books are more than just about superheroes with complexes in colorful tight spandex. In fact, comic books come in many different genres and are available and written for many different age groups — children and adults. Most may be familiar with the recent Hollywood fad of comic book adapted movies such as Iron Man, Sin City, Hellboy and The Spirit. But did you know that these — From Hell, Road to Perdition, 300, Ghost World, A History of Violence and 30 Days of Night — are comic book adapted movie as well? Comic book genres are endless; it is not always about punching super villains in the face or thwarting their evil plans and having to listen to their horrible monologues.

10). Almost shocking, but the world’s largest comic book collection does not belong to any real comic enthusiast or dealer. Instead it belongs to the Library of Congress in Washington, D.C. with over 6,000 titles and 100,000 issues — a massive collection that still continues to grow by about 200 issues each month. The Library of Congress has been accumulating comic books since the 1930s through copyright deposit and houses the most comprehensive collection with fairly complete runs of popular and rare titles such as Action Comics, Archie, Detective Comics and Wonder Woman. The collection is not viewable by the public for many obvious reasons. However, I’m sure comic book enthusiast and collector, President Obama, would have no problem requesting permission and gaining hands-on access. Now we finally know his true agenda for wanting to become president! 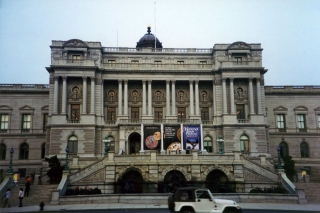