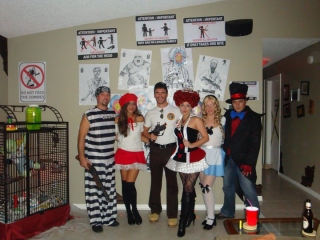 What would life be like after the dead begin to rise? It was a question I never once thought about until after watching “28 Days Later” (even if those infected maniacs weren’t technically “zombies”). Since then, the idea of an uncontrollable undead force of not-quite-mindless-people have awoken the Romero within me. And like a tried and true undead-head, I now blather incisively to anyone about all the newest-to-me zombie material I come across. I’m talking classics like the Romero series, the entire “Resident Evil” franchise, “Zombies Ate My Neighbors,” “The Zombie Survival Guide” and “World War Z.” Hell, even ancient stuff like “King of the Zombies.” What’s great about being an undead-head is that the more I talk about it with friends (and sometimes even strangers,) the more I realize that there are many who share my new found love of zombies and the simple horror they represent.

When Image Comics began to publish “The Walking Dead (TWD)” in 2003, it was during the peak of my zombie-craze. I’ve loved comics since I could remember, and already being a fan of Robert Kirkman’s “Invincible” — a must-read coming of age adolescent superhero tale — the jump into TWD was a no brainer. What I loved the most about TWD was how it differed from most zombie tales. It offered a survivor’s-eye view of what it would be like trying to live in a world over run by zombies. It was fresh and it was exciting. Kirkman offered surprises in the form of extreme violence to gut-wrenching deaths. But it wasn’t all shock and gore. Most of it took a backseat to the characters that populated TWD universe. All of whom had a full and normal live prior to the zombie apocalypse. Having such depth to the characters make it that much easier to identify with their frustrations and fears as they struggle simply to survive. Character are constantly stretched past their breaking points in a world where zombies are a constant, if albeit a slow-moving threat. When inner problems inevitably explode into emotional confrontations, it’s always exciting and extremely moving.

The announcement of “The Walking Dead” coming to network television couldn’t have come at a better time. An ongoing television series has been a longtime wish for zombie fans of all stripes. With all the amazing shows AMC have been making, I couldn’t have been more enthused. It also meant there’d finally be a way to expose more people to TWD, because let’s face it, comics tend to be a hard sell to those who didn’t grow up reading them (I did manage to get some friends to read TWD since promos started showing up on AMC). The premier of the show couldn’t have also come at a better time. With it premiering around Halloween, I figured I could tie a bunch of things I love together.

We’ve been throwing Halloween parties for a few years now but this was easily our longest-planned,
most thought out event ever. Various elements for a “surviving in zombie-world” theme were brought
up every time we watched another zombie movie, our braaaaaaaaaaains working. For whatever reason,
be it monster-spider invasion or Dexter-style chophouse, the previous parties never really included
the living dead.

The impending premier of TWD made it obvious that this was the year to finally pull the trigger.

The preparations began with a nondescript Facebook-event page listing a simple ‘news story’ from a local channel, coupled by a small, vague video:

From there, we went about changing the house into an outpost for survivors in a zombie-world.
Windows were boarded up and a graveyard was erected in the front yard. The event page on Facebook gradually reported worse and worse news as it became increasingly obvious that a zombie outbreak was happening across the country. Various videos were posted showing zombie attacks from different sources, including teasers and trailers for the premier of TWD. Amongst various other decorations set up around the house, I also made a tongue-in-cheek pamphlet entitled “Living with the Living Dead,” inspired by 1960s atomic bomb informational material. The purpose of the pamphlet was to remind guests (and neighborhood parents) about the new show. The pmaphlet was double sized, on the reverse side I made sure to include channel, time, and a can’t miss giant logo reminding people to watch. 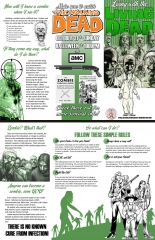 Below is a list of all the decorations done for the party. A complete gallery follows:

Front yard
– boarded up windows
– cemetery, fresh zombies freeing themselves from their graves
– television showing all the latest news reports, as broadcasts become available
– flag replaced with a white, hand-painted 994 flag, splattered with blood
– truck windows covered by bars, front fitted with a cowcatcher and the remains of a zombie

Living with the Living Dead informational pamphlets handed out to all guests and then trick r treaters
(for their parents) the next night
– big reminder on the back of time and channel for the premier of the Walking Dead tv series
– All tony moore art used in pamphlet printed in color(s)!

Guest bath
– signs of a recent attack, blood covering the window and towels and shower curtain
– a gun and machete always ready near the door, just in case