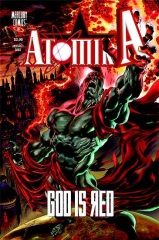 Self-published under Mercury Comics by series creator and artist Sal Abbinanti, Atomika has resurrected and the “God is Red” storyline will at long last conclude this year. Originally published in 2005 with Speakeasy Comics, Atomika is currently being self-published under Mercury Comics and resolicited in Previews and will be available for orders by your local comic book stores. Concluding the run, the series will also feature covers from some of the hottest artists in the comic industry from Simone Bianchi (Astonishing X-Men), to Claudio Castellini (Countdown), Travis Charest (Wild C.A.T.S) and Glen Fabry (Preacher Covers).

Having grown up in the ‘70s and heavily influenced by America’s paranoia of the Soviet Union, Abbinanti has transformed his experiences into an imaginatively dark and gritty epic set in a Jack Kirby’s “New Gods’ style chaotic landscape. The “God is Red” story unfolds in an alternate 1934 universe where the Soviet Union has outlawed religion deeming it counter productive to the state. Technology has essentially become god.

Recently, YouBentMyWookie had the chance to chat with Abbinanti who in addition to being an artist is also an artist representative and a family man.

Wookie: Take us through what it’s like being Sal Abbinanti on a normal a day?

Sal: I work through the night usually so don’t get up until about 10-11 am. Get online and work on my websites wwww.comicbookpros.com and then try and put it away and work on Atomika, getting to draw every day is really the best. Sometimes however my work, work consumes my entire day.

Wookie: What inspired you to get into the comic book business? Was it something that you’ve always wanted to do? Did you just happen to come across it, or are you just a masochist?

Sal: Oh no, I knew I wanted to be in the comic book business since I was a kid. When I first started reading comics in grammar school I was hooked right away.

I came from a big family so comics were my only escape.

Wookie: What do you think you’ll be doing if you weren’t drawing comics for a living?

Sal: Something creative, I was an animation/Film major in college so I would probably work in the film industry. 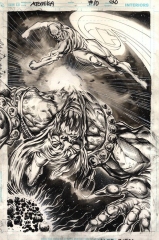 Wookie: It seems like you’re a big sports fan because there are a lot of pictures of you at sporting events online. What are some of your favorite teams(s) or player(s)?

Sal: Cubs, Bears, and Blackhawks, I’m a big Chicago sports fan. I don’t live in the past but I was a three sport guy in High school. Played a ton of football.

Wookie: Any idea why there aren’t a lot of sport related comics in America especially since they’re extremely popular as Manga? Do you think it has anything to do with our fixation of muscle-clad superheroes in spandex tights?

Sal: Not sure sports translate well into comics. Especially with Madden football and Xbox games out there. They’ve tried a bit they don’t seem to catch on.

Wookie: Are you reading any comics now? If so, what titles?

Sal: I read as much as I can but the comics I buy seem to pile up no matter what I do to try and get to them. Marvel masterworks (Thor Kirby stuff). Anything by John Romita JR, Mike Mignola’s Hellboy, or Golden and Silver Age Marvel. Also the Losers hardcover, 1970’s Kirby War title I’ve been pouring over right now. Big, big Kirby, John Buscema fan.

Wookie: In your comic book, Atomika represents technology and is essentially the new God of the 20th century. Do you think our world will ever become as apocalyptic as we slowly venture into the new digital frontier?

Sal: Well technology has replaced religion for most Americans already. We have this love affair with our cell phones and Tivo’s. I mean look at what a consumer society we are as Americans and how it’s affecting the rest of the world when we stop spending. Yes, I think we’ve become digital whores. I’m such a sucker for High Def though.

Wookie: Have you ever thought about expanding Atomika to other mediums? 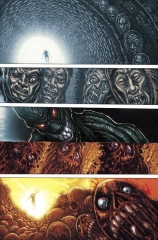 Wookie: Any advice for those interested in self publishing?

Sal: Go for it. Put it on the page. Don’t give in to all the negative bullshit. Where is the next great wave of comic Artists and writers? They’re out there right now. But we need to chim in and support more indy titles. All types, not just superhero stuff.

Wookie: What projects do you have coming up and where can people go to see you online or at any upcoming cons/events?

Sal: I have a few projects I’m really looking forward to diving into once I complete Atomika. One is set in South America and was developed as a comic back when I was at USC. It deals with the street children in Brasil. www.mercurycomics.com is my main site for Atomika. Also www.salabbinanti.com for some of the other stuff I’ve been milling around with over the years.

Atomika is self-published by Mercury Comics, drawn by Sal Abbinanti, written by Andrew Dabbs and colored by Christina Strain and Beth Sotelo. Local retailers that order 10 or more copies will receive a FREE Alex Ross Obama Time for a Change Limited Print.