“I always liked to take things that you wouldn’t necessarily think of as cute, like Steve Buscemi in the wood chipper from Fargo and do a cute version of it.”

We’ve been posting about Kawaii Pop Artist, 100% Soft for over a year now, sometimes without even knowing it. The man who has built his reputation for creating adorable, emoji-like illustrations of pop culture icons has become so respected that Disney came to him when it came to creating the official Star Wars emojis. With his new show, Mass Hysteria 2, now showing at Gallery 1988 in LA, we wanted to take a few moments to sit down and talk to him about how he got to where he is, his favorite things that he’s ever created, and what inspires him.

YBMW: When you were a kid, what were your favorite shows, cartoons, movies?

100% Soft:
Growing up I loved Star Wars, the original Scooby Doo Where Are You, Spaceballs, Pee-Wee’s Big Adventure, Ren & Stimpy, Big Trouble in Little China, Jaws, Ghostbusters, Batman 89 and basically anything Marvel related, like Spider-man and his Amazing Friends or the 80s made-for-TV Hulk movies that had really low rent versions of Daredevil and Thor. My family didn’t have cable for a good chunk of my childhood, but my grandma would tape all kinds of movies for me on HBO and send them to me, so I would just watch those over and over.

YBMW: When did you know you wanted to be an artist?

100% Soft:
I’ve been drawing ever since I can remember. When I was a kid, I thought the only logical choice was to be a comic book artist, but I sort of gave up on that as a teenager and ended up working as a web and graphic designer and stopped drawing for the most part. I picked it up again later on down the road when that work started to be less fulfilling for me and I’d see other artists creating stuff that looked so cool and I felt like I was missing out on all the fun stuff. 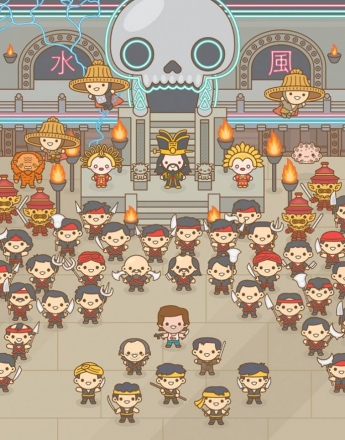 YBMW: What inspired you to move towards the such adorable interpretations of pop culture characters?

100% Soft:
I’ve always really liked Japanese kawaii inspired brands like Sanrio and San-X, as well as all the designer toy boom from the early 00s that Kid Robot was sorta leading the charge on, so I’d look at characters like Jack Burton or Lo-Pan from Big Trouble in Little China and imagine what their super cute counterpart would look like. I always liked to take things that you wouldn’t necessarily think of as cute, like Steve Buscemi in the wood chipper from Fargo and do a cute version of it. Mainly just to get people to smile and laugh at something they can recognize or love but being portrayed in a way that’s antithetical to its subject matter.

100% Soft:
For my last solo show, I did a 9.5 ft piece based on the 2014 movie Snowpiercer, which basically came out exactly how I wanted it. From concept to execution, it all went really quick. I had to work with my framer and printer pretty closely to ensure it was even possible, but I felt pretty proud of the final product, which shows basically every key scene from the movie in each train car. It was such a niche print, but I really loved the movie and conceptually it was such a no-brainer, I just had to do it.

YBMW: Is there a particular movie or property that you want to do, but you find either intimidating or you just aren’t sure how to approach it?

100% Soft:
Oh there are tons.I started a Purple Rain piece before Prince died that I really wanted to finish for my show but I just couldn’t quite get it where I wanted it. It just kept getting bigger in scope, so if I ever finish it someday, it’ll probably end up being a 12 foot tall interactive holographic projection, haha.

YBMW: How did you end up creating Disney’s Star Wars Emojis? 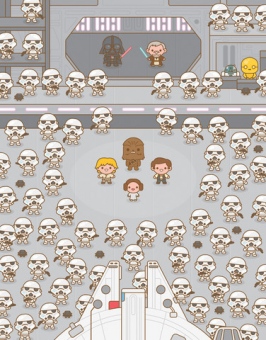 Gallery 1988, who I’ve worked with for years, had been working with Lucasfilm on the Art Awakens project and pitched me to them because my style lends itself very well for emojis. They checked out the Star Wars print I did for my last show and thought it’d be a good fit and we were off and running. I started off by creating 3 unique emoji: TFA Stormtrooper, C-3PO, and Kylo Ren, for use on Twitter during Star Wars celebration and then we expanded it to about 75+ for the Star Wars app.

YBMW: What’s your favorite Star Wars film and why?

100% Soft:
You can’t beat the original for me. I have seen that movie so many times, and even after not seeing it for years, I can still watch it and marvel at how well made it is. Second is Empire, third is Jedi.

YBMW: Is it more fulfilling for you to work on your own creations, like The Kaiju Kitties, or to finish an epic project like the five foot long Mad Max Fury Road piece you completed for your new show?

100% Soft:
Both are totally fulfilling in their own ways. It’s really fun being able to create my own characters and organically grow those into something that is more than just a drawing on a piece of paper, whether it’s as a plush toy or a pin or apparel. Of course, I’m still a huge pop culture nerd, so any time I see something I really love, like Fury Road, I can’t help but draw it. Working on both existing and original properties in tandem has allowed me to grow a lot since each project usually has different needs and lessons I’ve learned on one will apply to something else down the line.

YBMW: Who are currently your favorite artists?

YBMW: If you could go back and grab 15 year old you by the collar and give him one nugget of wisdom, what would it be?

100% Soft:
Probably just to be more confident, try new things and to listen to more My Bloody Valentine.

YBMW: What is coming up for you next?

Special thanks to 100% Soft for sitting down and chatting with us. If you are in LA, you can check out Mass Hysteria 2 over at Gallery 1988. If you are interested in buying a print, pin, or plush, check out his store.