YBMW correspondent Chucking Dice gets a chance to chat up Goerge Wyner about his role in ‘Spaceballs’ as Colonel Sandurz.

YBMW correspondent Chucking Dice got a chance to chat up Goerge Wyner about his role in ‘Spaceballs’ as Colonel Sandurz. He was involved with one of the most famous and probably most quoted scene of the film, “Keep firing assholes!” Remember, after you read the interview, make sure to sign up with our giveaway for a copy of the brand new 25th anniversary ‘Spaceballs’ Bluray that is covered in extra features.

YBMW: You’ve had a remarkable career, even before ‘Spaceballs’. You’ve had acting credits in ‘The Bob Newhart Show’, ‘Sanford and Son’, ‘The Bad News Bears’, ‘All the Presidents Men’, and countless other films and television shows. How did your involvement with ‘Spaceballs’ start?

George Wyner: I was offered a chance to audition for a small role in the film, ‘My Favorite Year,’ and actually hesitated because it was another “lawyer” role. My agent explained that the film was being produced by Brooksfilms, Mel Brooks’ production company, and it would be a chance for Mel to see my work. That was a good point. A really good point, as it turned out, because after seeing the film, Mel’s office called my agent to set up a meeting. When I walked into Mel’s office, he greeted me with one of my lines from the film – a line that I had gotten permission from Richard Benjamin, the director, to ad lib. There’s a lesson in there somewhere.

George Wyner: Mel proceeded to tell me that he was interested in my being in his next film, “To Be or Not To Be,” in which he and his wife, Anne Bancroft, would be starring. That one I didn’t have to think about. I’m a quick study. My work in that film then led to a meeting with Mel and Rick Moranis, who, of course, had already been cast. Rick and I read scenes from the script and did some improvisational work in character . As well as that went, I still had to wait for the studio to approve me, since they had anticipated that a bigger-name actor would be cast in the role of Colonel Sandurz . Thankfully, Mel won that battle.

YBMW: There are obvious thematic similarities between Colonel Sandurz and Peter Cushing’s role from Star Wars, Grand Moff Tarken, but your character ended up being remarkably different in performance. Did it purely come from the writing, or did you mold the character and if so, where did that person come from?

George Wyner: I didn’t look to Star Wars. I just listened to Mel. Everything came from him, both on the page and on the set. All I had to do was trust that I was in good hands – really, really good hands. What he was looking for in Colonel Sandurz was a second banana to Dark Helmet. Second bananas have been around since vaudeville, if not the Greeks. A second banana’s job is to set up the joke for the first banana. It’s like a pitcher lobbing the ball underhand to the batter so he can hit it out of the park. And Rick never missed a lob.

YBMW: You were partnered up with Rick Moranis for the majority of the film. After a while, you also shared screen time with Mel Brooks’ himself. Every scene that had your involvement ended up being comedic gold whether it was the physical acting of Ludicrous Speed, or simply fast forwarding a VHS tape. I’m not an actor, but I’d imagine it was probably hard to hold in the laughter from the material. Were there any strategies you had to use to prevent this from happening, and if so, what did you do? 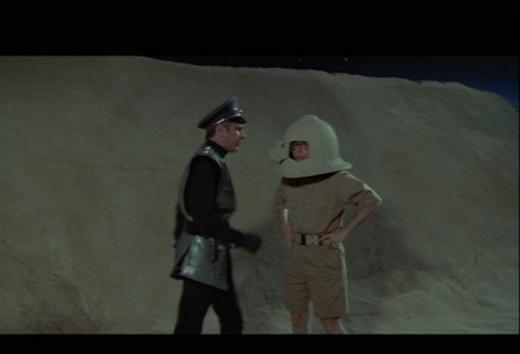 George Wyner: Mel believes, as a director, that to do your best comedic work, you should be having fun. And we did, if one of us broke up during a scene, Mel laughed right along with us, and there was plenty of laughter on the set. On more than one occasion, Rick would deliver a line of dialogue and then drop his dark helmet visor to cover his face so that no one would see him laughing. All that was left for me to see was his knees shaking. Yes, even his knees are funny.

YBMW: On the subject of Rick Moranis and Mel Brooks, what was it like working with these two? There was certainly a lot of chemistry between you three, and I’d argue that the scenes with the villains were the most entertaining parts in the picture. Do you have any fun stories from the set?

George Wyner: The chemistry between Rick and Mel and I felt great right from the beginning, even back to my audition scenes with Rick. It’s hard to define chemistry, but everyone knows when it works. The only time the chemistry almost didn’t work for me was when I had to carry an unconscious Princess Vespa (Daphne Zuniga). Rick made a joke just before the first take, and, as you can imagine, it is very hard to lift a person when you are trying not to laugh. In fact, it’s hard to do anything. What I clearly remember is that with each take – and there were many – Daphne’s limp body was being carried closer and closer to the ground. To this day, she has no idea how close she came to being carried out for real on a gurney.

YBMW: Speaking of Ludicrous Speed, the film visualizes the entire sequence for the viewing pleasure of the audience. As an actor on set, you didn’t have that luxury. How did you picture Ludicrous Speed before the special effects? 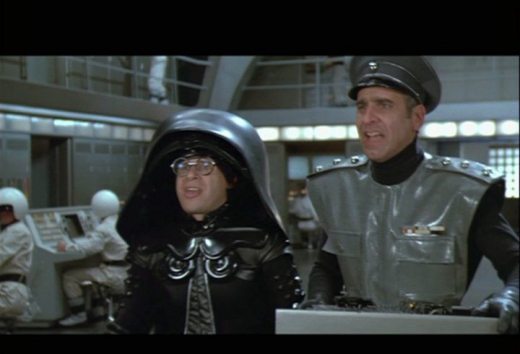 George Wyner: Stop me if you have heard this before. Mel. It was his voice yelling, “Make it funnier! Do it again!” Trust me, that’s more pressure than any G-force image you could conjure.

YBMW: As I mentioned before, Star Wars was a heavy influence on the picture. However, Spaceballs manages to keep extremely high production value. A person might mistake the special effects and sets for the original George Lucas movies at first glance. What was it like to work on something that looked authentic?

George Wyner: It always makes an actor’s job easier when you don’t have to imagine the setting; you’re actually in it. That’s how I felt the first time I walked on the soundstage and saw the inside of our battleship. When the scene calls for an actor to yell commands to his crew, it’s much easier when you’re actually standing on the bridge of a huge ship surrounded by “assholes.”

YBMW: In Star Wars, the fans have this thing called the expanded universe. This is pretty much speculation on what happened to their favorite characters before and after the events of the movie. I’d like to think Spaceballs has it’s own expanded universe. What do you think happened to Colonel Sandurz when he found himself on a planet of apes? 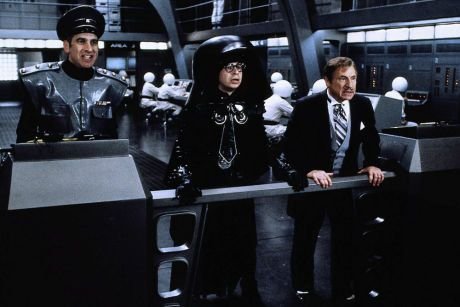 George Wyner: Scroob, along with his trusted aides Dark Helmet and Colonel Sandurz, made a fortune polluting California, and is now considering running for president.

YBMW: Thank you so much for your time and all the laughs!

Chuckingdice is a writer and fantasy roleplaying enthusiast since he was in third grade. He currently resides in Los Angeles, and often quotes Brando from Apocalypse Now in his one bedroom apartment when he’s not making internet video reviews. He can be reached at Chuckingdice [at] gmail [dot] com or on twitter @ChuckingDice.