“Alcatraz” is not EXACTLY as simple as a prison being shut down like I had initially thought. Then again, why would I ever think something from J.J. Abrams would be simple? 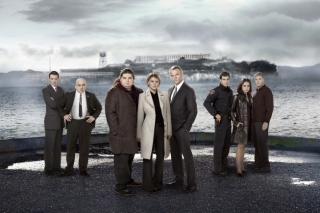 When “Lost” first came out, I was like “How the hell is a show about plane crash gonna be any good?”. And then I got my mind blown.

When the previews for “Alcatraz” were airing, I was thinking to myself “This looks boring. How is a show about a prison gonna be any good?” I happened to have the TV turned to FOX when the premier came on and I watched it because I had nothing better to do. And I had my mind blown again.

J.J. Abrams is back in full force.

Here’s the opening dialogue of the show from Wikipedia :

On March 21st, 1963, Alcatraz officially closed. All the prisoners were transferred off the island. Only that’s not what happened. Not at all.

Okay….so it’s not EXACTLY as simple as a prison being shut down like I had initially thought. Then again, why would I ever think something from J.J. Abrams would be simple?

The opening sequence shows a man we soon learn is an Alcatraz inmate running around present day San Francisco and causing a ruckus.

He makes vague references to “they” and is eventually caught alive.

I’ve watched every episode so far and none of my questions have been answered!

Who’s behind the reappearance of the prisoners? Is this the “they” Jack Sylvane was referring to?

Who or what was behind the mass disappearance in 1963?

Why did they take everyone?

And how is it that Lucy did not age also?

What kind of experiments are they running on the inmates?

Is the reason why they’re desperately trying to catch them all again like Pokemon because: – they’re trying to cover up the mass disappearance in 1963 OR – does it have something to do with the experiments it looks like they’re running in the prison hospital?

How did Sam Neil’s character know approximately when the inmates would start resurfacing?

Who handled the inmates when they reappeared in the present day world? Both inmates from Episode 1 and 2 had money and other items in their pockets that I’m sure weren’t there when they were still locked up in the 1960’s. 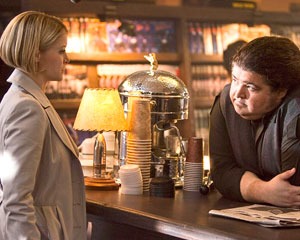 WHAT THE HELL IS GOING ON???

As you can see, my questions are many but the answers have yet to make their appearance. That means I will be wiggling like a fish on a hook as I wait impatiently every week to see what the hell happens.

Man, when will Hugo ever catch a break? First, he’s stranded on an island from a plane crash.

If Jorge Garcia’s character, “Doc” Dr. Diego, buys a lottery ticket…I’d pee my pants laughing. Well, not really but I think it would be kind of neat. ^_^

Sam Neil creeps me out. He scared the beejezus out of me in “Event Horizon” and I’ve never been able to shake that movie off of him.

I definitely can’t figure out what his deal is this early into the series. Why is he trying to track down the fugitives? Is it because they escaped? Is it because he and the organization he works for is
trying to prevent the public from knowing what really happened in Alcatraz?

Does he know what happened all those years ago? What about his relationship with Lucy? He seems to care an awful lot for her.

Why won’t he tell Doc and Rebecca more about what’s going on? Or are they just pawns to be used?

From what I’ve seen so far, I think they did an EXCELLENT job in casting him for the part. He totally ups the creep factor in Alcatraz.

How convenient that her grandfather was an inmate and plays (for now) a central part of the whole mystery surrounding Alcatraz in the 60’s.

Overall, I think her character is a good one but falls a bit flat. She reminds me of an over eager puppy straining at the leash and trying to make a mark in the world.

Thank you for being the reason why I will be glued to my TV every night “Alcatraz” airs. I will blame you for turning me into a mindless zombie obsessed with a prison and churning out conspiracy theories a mile a minute when I watch your show.

You’ve turned me into a breathless victim of the mystery you’ve created in your new show. I’ve been screaming “OH, COME ON!!!” at the end of every show because I’m not any closer to figuring out any of the answers. It’s very frustrating…and yet, I can’t stop watching.

I have no idea how you turn seemingly boring TV show ideas into such mind boggling wonderlands.

Yours truly (because your shows are maddeningly addictive and I can’t stop myself),